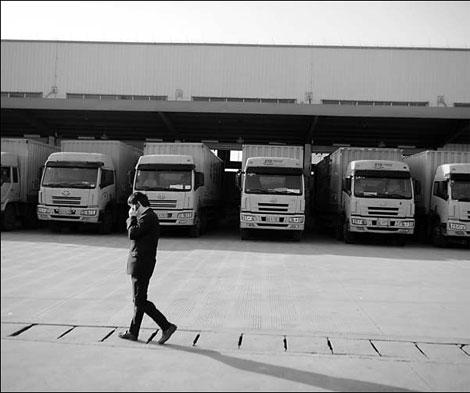 Shentong Express' Zhejiang headquarters in Hangzhou. Revenues of the country's express-delivery business grew by 20 percent year-on-year in 2010, according to the State Post Bureau.[China Daily]

The State Post Bureau clamped down on 56 express-delivery companies over a two-month period in an effort to regulate an industry that has been experiencing rapid development, but lacks proper management.

The bureau banned 56 companies that were operating without permits from conducting express deliveries during an inspection of the industry in March and April. Of these companies, 32 were franchises of Shanghai Yuantong Express, ZTO Express, Shentong Express and Shanghai Yunda Express, the largest private express-delivery companies in China.

"The companies use franchises to quickly increase their coverage across the country, but they just don't have strong control over these franchises," said a former senior manager of one of the largest private express-delivery companies.

Though the industry has developed quickly over the past five years, there are few players with a good reputation, advanced technology and competence, said a regulatory report by the State Post Bureau.

"Most of the companies in the express-delivery market are small ones that have a relatively weak foundation and low productivity," said the report.

China's express-delivery industry has been boosted by the booming online shopping market in the country, where transaction volumes more than doubled to 520 billion yuan ($79 billion) in 2010 from 253 billion yuan in 2009, according to the domestic research company Analysys International.

Revenues of the country's express-delivery business grew by 20 percent year-on-year to 57.5 billion yuan in 2010, according to the State Post Bureau. That accounted for about 0.3 percent of China's GDP last year.

However, along with the industry's growth, problems have arisen, such as poor management, a lack of standardized operating methods and the low professional standards among staff members, with increasing complaints from customers.

By the end of 2010, there were 542,000 employees in the express-delivery industry, up 35 percent from 2009, according to the bureau. In a labor-intensive industry, the companies need to improve the quality of their employees and improve the overall quality of service, said Chen Shousong, an analyst with Analysys International.