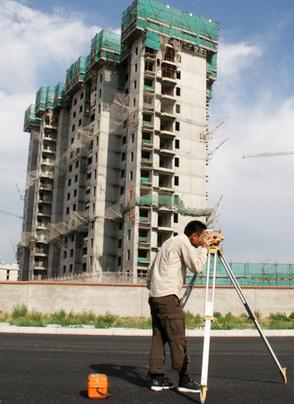 A surveyor at work outside a property in Beijing. Property companies are now under pressure to cut prices of new homes to ride out tightening measures. [China Daily]

To contain housing inflation and curb speculation, China has leaned on its property market since late 2009 with a slew of tightening measures that have slowed gains in record home prices.

With growing expectations that China will not relax its policy stance before the end of the year because of the resilient economy, some analysts are starting to forecast declines in home prices of up to 10 percent later this year.

"We are not going to cut our sales target for this year, but the company will face rising difficulties in meeting it," Wang Yi, a board secretary at Beijing Capital Development, told Reuters in an interview.

"The whole industry faces a tight cash problem as loans are difficult to get and sales are not satisfactory," he said.

"Our performance appraisals for staff will now lean more towards sales and we will give project companies more flexibility in pricing," said Wang, referring to price cuts.

A third of the company's projects are in Beijing, where there are severe restrictions on property purchases.

Wang said an increase in property supply after July or August would also drive down prices.

Like others, he said China would not relax its property tightening before the end of the year.

"China will not change its policy stance if the internal and external economic situations remain stable," Wang said.

Beijing wants to cool house prices to check inflation, which hit a 34-month high of 5.5 percent in the year to May and could quicken to 6 percent in June or July.

To make use of a recent pullback in land prices on the back of a slowdown in the housing market, Wang said his company would buy more land later this year in Beijing, the Bohai Bay area and the Yangtze River Delta.

That would add to its land reserves, which grew last week after the company bought two plots in Beijing for a total of 1.3 billion yuan.

Beijing Capital Development, along with other State-owned developers, is joining the country's efforts to build more affordable homes for its poor, despite slim profit margins, to show that they are socially responsible.

The company has so far started construction of more than 600,000 units this year, and could break ground on another 600,000, Wang said.

In response to rising complaints about record high home prices, China plans to start building 36 million State-subsidized homes in the next five years at a cost of more than 4 trillion yuan.

Wang said developers preferred to build State-subsidized homes that are for sale rather than for rent as saleable properties bring better profit margins.

He added that Beijing needed to increase spending on subsidized homes for rent, because local governments do not have enough funds to meet the ambitious target.

China is currently demanding that local governments, banks and developers fund about 90 percent of total investment in its affordable-housing scheme.