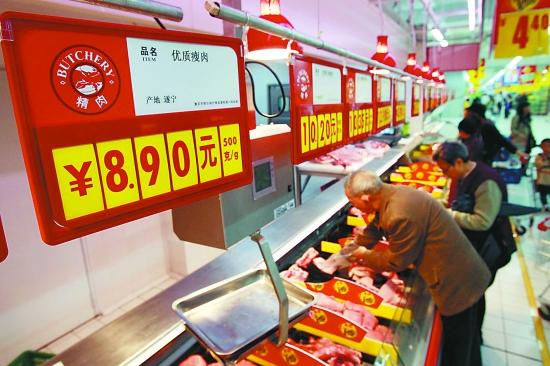 Pork prices keep their bull run in the week ended June 26 with an increase of 4.5 percent week-on-week, according to the Ministry of Commerce (MOC) on June 28.

In China nowadays, it is pigs rather than bulls that touch the nerves of the markets.

Pork prices kept their bull run in the week ended June 26 with an increase of 4.5 percent week-on-week, according to the Ministry of Commerce (MOC) on Tuesday.

Pork prices soared 40.4 percent year-on-year and helped drive up the inflation rate to a 34-month high in May.

Since early May pork prices in China have continued rising mainly due to the cyclical live-pig supply shortage and higher costs for pig feed caused by rising grain prices.

Pork is the most widely consumed and affordable meat in China, and its price weighs heavily on the consumer price index (CPI).

The MOC data showed that during the week ended June 26, meat prices rose from the previous week with pork up 4.5 percent, beef up 0.9 percent, chicken up 0.6 percent and mutton up 0.4 percent.

Heavy rains and floods in the south pushed up the average wholesale prices of 18 staple vegetables by 2.3 percent as a whole, with the wholesale price of cabbage and Chinese cabbage up 20.3 percent and 17.9 percent from previous week.

Prices of rice and flour added 0.5 percent and 0.4 percent from the previous week, respectively.

Food prices have a key weight in the calculation of CPI, a major gauge of inflation, which spiked to a 34-month high of 5.5 percent year-on-year in May.

Prices of most producer goods, which are a major factor in CPI calculation, fell during the period from previous week.