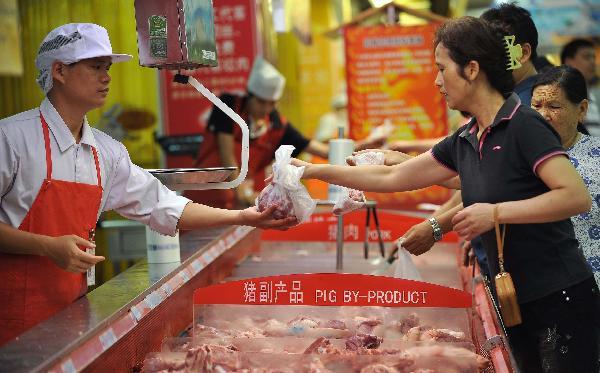 A customer shops for pork at a supermarket store in Haikou, South China's Hainan province, June 21, 2011. Data show pork prices have surged more than four percent over the past ten days. [Photo/Xinhua]

A senior government official in charge of animal husbandry with the Ministry of Agriculture predicated Sunday that pork prices will gradually stabilize in July or August as farmers increase their live pig stocks.

The public has been engaged in heated discussions online regarding pork prices recently with some saying that they are "crazily" high and cannot afford the meat.

Data from the National Bureau of Statistics showed pork prices in June surged 57.1 percent year-on-year, contributing about 21 percent to the nation's inflation as the Consumer Price Index (CPI) in the month jumped 6.4 percent, the highest level in three years.

The price has also climbed by a whopping 11.4 percent from May as the price growth accelerated by 8.8 percentage points. Pork in Beijing on Sunday rose to 36 yuan($5.5) per kilo.

Wang Zhicai, director of animal husbandry under the ministry, said the high pork price was primarily due to the surging cost of raising pigs. "Feed-stuff and corn prices reached 2.18 yuan per kilo on average in the first half of the year, that's up 10.7 percent from a year ago," Wang said said.

In the first six months, 4.8 percent less live pigs were sold on the market, Wang said.

"More farmers are choosing to work in cities, that means the number of individual breeders of live pigs is also going down, which has an effect on market supplies," Wang said.

According to data collected from 420 trade markets, pork prices in June shot up 66.5 percent year-on-year, while the price of live pigs grew 81.9 percent to reach 17.54 yuan per kilo.

He predicated price growth of pigs will gradually ease, but as pig-raising costs are high, pig prices will remain at a high level.

In order to stabilize the meat market, local governments should implement the central government's guidelines in rewarding major pig-raising counties and stepping up support for the construction of standardized pig farms, Wang said.

Wang urged local governments to provide assistance in addressing the needs for finance and land use from the pig-raising industry. Wang said experts from Beijing will be sent to villages to give pig-raising training to farmers.

Wang said his department will also strengthen the monitoring of pig output and market changes in order to prevent big fluctuations of pig prices.