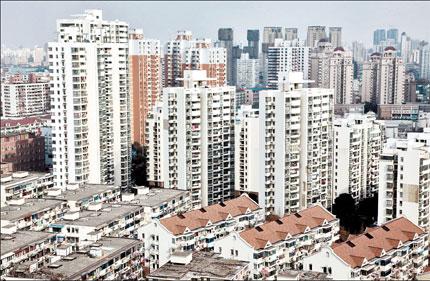 Apartment buildings stand in Shanghai. New home supply in the city soared to the highest in five months last week, with sales little changed but the average price fell more than 2 percent.[Shanghai Daily]

New home supply in Shanghai soared to the highest in five months last week, with sales little changed but the average price fell more than 2 percent.

"Despite a significant increase in new supply, buying momentum continued to remain sluggish with weekly transaction volume failing to rebound above the 200,000 square meter barrier for another week," said Lu Qilin, a researcher with Deovolente.

But Lu noted that if real estate developers offer attractive prices, it could trigger robust sales as he cited the example of a project in outlying Baoshan District.

The Baoshan project, last week's best-seller, managed to sell 228 apartments at an average price of less than 12,000 yuan per square meter. It was the only residential project in the city that has sealed more than 200 purchase deals in a week since late January when the central government started to launch a series of tightening measures to combat surging housing prices.