Bustling Xidan Street in downtown Beijing is home to dozens of clothing stores, featuring both foreign and domestic labels.

It is also testimony to the growing popularity of domestic brands. Not only are Zara and H&M full of chic teenagers, but so, too, are their Chinese competitor, MetersBonwe.

Li Ning, the final torchbearer during the opening ceremony of the 2008 Beijing Olympics and former gymnastics gold medallist, has also seen tremendous growth in his namesake company, Li-Ning Co Ltd.

His sportswear business is a top domestic brand in China, with more than 7,900 stores across the country. Although it has forecast a fall in sales and a 1 percentage point decline in gross profit margin for 2011, Chief Executive Officer Zhang Zhiyong told the Wall Street Journal that it plans to invest $10 million in its United States operations this year.

Li-Ning first entered the US market in 2007 by setting up a research and development center and design studio in Portland, Oregon. Among its staff are at least 30 veterans of companies such as Nike, Adidas, Converse and Columbia.

Li-Ning's products sold in the US include equipment and apparel for Asian-dominated sports such as ping-pong and badminton, niche areas in which Li-Ning is an established leader.

Other Chinese rivals to the likes of Nike and Adidas are Peak and Anta, which are both listed on the Hong Kong stock market and have successfully sponsored the US National Basketball Association (NBA).

"Privately-owned garment enterprises, compared with their overseas rivals, have the advantages of modern equipment and greater flexibility in product type, distribution channels and types of incentive systems," said Chen Chong, a retail analyst with Founders Security. 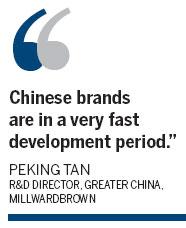 "Chinese brands are in a very fast development period," said Peking Tan, R&D director of Greater China with MillwardBrown, a world-leading research agency. "The rising Chinese brands also benefit from their huge domestic market, with which they are familiar."

Since the late 1970s, China's garment industry witnessed rapid development under the country's economic reforms and opening-up policies. Dramatic changes caused by these reforms have touched virtually every aspect of China's economy and society.

In 1992, China initiated efforts to establish a market-oriented economy. These reforms improved the flexibility and responsiveness of the Chinese apparel industry. Over time, the Chinese industry has progressed from being largely volume-driven in the 1960s and 1970s to being export-driven in the 1980s and early 1990s to being more consumer-oriented today.

In 1995, China became the largest apparel industry in the world with more than 3.9 million workers employed in 47,000 factories and companies.

China's sewing industry has long been concentrated in its coastal region, with its relatively convenient transportation and communications, good infrastructure and external economies of scale.