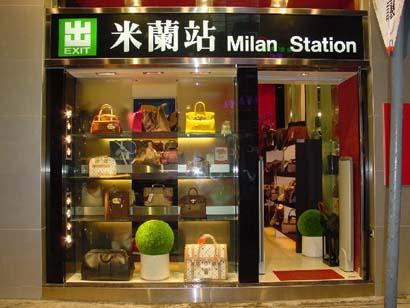 Shares in Milan Station Holdings, a Hong Kong-based secondhand luxury handbag retailer, closed at HK$2.77 per share ($0.36) on the company's trading debut Monday, up 65 percent compared with its issue price.

Shares in the company touched HK$2.96 in morning trading, 77 percent above the issue price of HK$1.67 per share.

The company aims to issue 16,252,000 shares, but more than 35 billion shares have been ordered by investors, which means that the company's initial public offering was oversubscribed by more than 2,179 times, according to a statement from the company.

This performance has beaten the previous record in 2006 Tianjin Port Development's IPO was oversubscribed by 1,702 times making Milan Station the hottest listing in Hong Kong ever.

According to Gao Boxuan, an industry analyst with CIC Industry Research Center, luxury goods consumption in China has reported robust growth in the past three years, with annual growth of up to 12 percent.

Gao said that Milan Station had won over its target customers by providing luxury goods at reasonable prices, but in the long run the company may face problems in supply of secondhand luxury products.

"The company should make adjustments to its business model in order to guarantee sustainable growth," said Gao.

Earlier reports suggested that Milan Station is planning to launch its own brand handbag.

"Only four companies have floated in the Hong Kong Stock Exchange this month, and the first three were all industrial stocks," said Li, adding that investors generally prefer consumer goods stocks that they are more familiar with.

Boosted by the robust market for high-end products on the mainland, the Hong Kong Stock Exchange has become popular with luxury goods companies seeking growth, both from home and abroad.

Prada will make its debut on the Hong Kong exchange on June 24, with the hope of raising up to $2 billion, according to an AFP report. And Coach also said that its Hong Kong listing could happen before the end of this year.