A vast roster of international political and business leaders flocked to Ma'anshan, Anhui Province on May 23 for the opening ceremony of the fourth annual Global Outsourcing Summit. 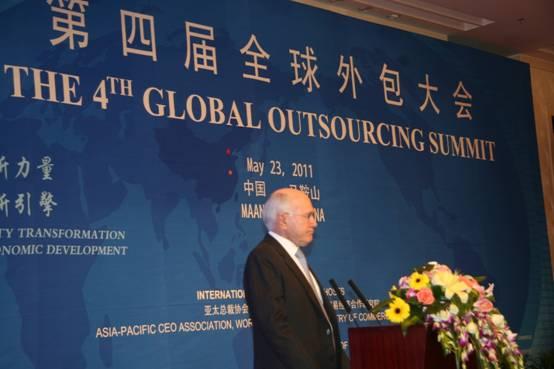 Former prime minister of Australia John Howard addresses a crowd of international political and business leaders at the opening ceremony for the 4th Global Outsourcing Summit on May 23, 2011 in Ma'anshan, Anhui Province.

The theme for this year's summit, "International Outsourcing New engine of World Economic Development, New Force of Chinese City Transformation" underscored China's strategy to develop outsourcing as a tertiary industry in many of the nation's cities.

As China's economic structure evolves, the function of Chinese cities is gradually transforming. Officials say outsourcing centers improve the quality of life in urban areas, since it shifts the role of the urban workforce.

At the summit, secretary-general of the China Center for International Economic Exchange Wei Jianguo said cities should take measures should to promote the development of China's outsourcing and use outsourcing to drive urban transformation.

During the 12th Five-year Plan period (2011-2015), China will continue to transform its economic development pattern from export-driven manufacturing to the service sector, to help create a self-sustaining economy. Thus, outsourcing centers in China have great potential for future growth.

Another discussion topic at the summit will be how new technology will transform global outsourcing. Leaders have recognized that technological innovations will be a key factor in the development of outsourcing centers in China, and are the only way the industry will be able to maintain steady growth.