Porsche steps on the accelerator

Porsche steps on the accelerator 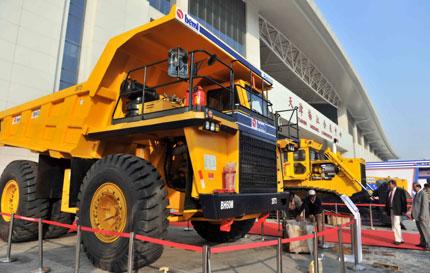 A tipper truck is seen at the China Mining Congress and Expo 2011 that opened in Tianjin yesterday. The three-day exposition hosted by the Ministry of Land and Resources and the Tianjin government will focus on strengthening international cooperation and accelerating geological exploration.

Ten years ago when Porsche entered the Chinese market, the sports car concept was relatively unknown.

But a decade later, the Stuttgart-based company's product has become a household name, not just for its stunning sales performance and its racing heritage but also for its outstanding customer services and product development.

As the carmaker celebrates its 10th year in China, Helmut Broeker, Chief Executive Officer of Porsche China, says the most notable development is China's soaring ranking in Porsche's global portfolio since opening its first Porsche Centre in Beijing.

Last year, more than 13,800 Porsche vehicles were sold on the mainland, an increase of more than 60 percent over 2009.

In the first half of this year, deliveries to China grew another 50 percent to 12,267 units, outpacing a 36 percent rally in its worldwide increase. That makes China the second largest market for Porsche worldwide, trailing only the United States.

As China's economy grows, the company's sizzling business performance was a combined result of its strategy to introduce the right products to the market and all-around efforts to establish the upscale brand image, according to Broeker.

"We have managed to build up a very strong brand in China, which is a key driver at the moment and makes us a little bit independent from the competition," he says. "I think we have found a very good combination of good products and good brand image."

Porsche opened its first dealership in Beijing in 2001, when only sports cars were available to the consumers. Sales were quite limited with total deliveries of only 27 cars in 2002.

Business picked up after the second generation of Cayenne sports utility vehicles hit the market in 2006. The launch of its first four-door sports sedan Panamera in Shanghai in 2009 further fueled the momentum.

Now, Porsche has expanded its product line to four series, including the 911 Boxster, Cayman, Cayenne and Panamera.

The carmaker will have around 40 Porsche Centres by the end of the year, up from 12 dealerships in 2007.

The growing brand awareness of Porsche is also powered by various events that aim to deliver the brand's core value.

In addition to its "Empowering the Future" corporate social responsibility program, Porsche has been promoting the Carrera Cup Asia and organizing "Drive to Excellence" and Porsche World Roadshow in China that can appeal to more potential customers.

"By 2014, China will be the largest market for Porsche worldwide when a smaller SUV, the Cajun is expected to be launched," Broeker says.

"This will be the right product for China, and we will see the highest volume for the Cajun here," Broeker says with confidence. "It's a fantastic car, and I am thrilled."

But before Porsche anticipates further growth in China, one of the major tasks for Broeker is to cope with its tight supply. Some customers have been waiting for one year for the new Cayenne off-road and still can't get it.

"Next year, I am quite confident we will get more supply," he said. "We can at least reduce the waiting time significantly; my target would be to get down to six to nine months to delivery for the Cayenne next year."

Broeker said the group is expected to invest in more resources in China and develop more products that are tailor-made for the local market.

Now, Porsche sends engineers to China every year to conduct vehicle testing to meet the particular requirements of Chinese consumers.

"Because our importance has grown and our voice internally is being heard, if we have concerns, the head office is much more likely to listen," said Broeker.

According to Porsche's plan, among the new products to be available in China is the new Porsche 911 sports car that will hit the market next year.

With the car, Porsche hopes to further strengthen its presence in the sports car segment in China.

Although China currently records fewer sales for its two-seat sports car, Broeker said he is convinced of the market potential here because there is a growing number of entrepreneurs and business people who enjoy life, who enjoy driving with an attitude to reward themselves for what they have achieved.

At the end of this year, the Panamera Turbo S, exhibited at Auto Shanghai, will begin sales. On top of that the Panamera S Hybrid will be available by year end.

By August, Porsche had sold almost 300 Cayenne S Hybrid, which seems to be the highest number compared to any other market.

Looking into the next decade, Porsche will especially ride the wave of green technology to maintain its leading market position and stay ahead of its major competitors, he said.

Porsche showcased the 918 RSR the innovative new motor sports version of the 918 Spyder Concept that incorporates the innovative Hybrid technology and a flywheel accumulator - at Auto Shanghai this April.

"I think it's a great product, it's expensive but it could be the sports car of the future." said Broeker,

"I don't expect a massive increase of electric cars in the general market in the next 10 years because the technology is still expensive," he said.

"But in some segments, we will see drastic changes and the 918 Spyder will be the first big step for us."

The new Cayman S, a two-seater sports coup positioned between the Boxster S and the 911 Carrera was launched.

The world premiere of the flagship model - the new Porsche Cayenne Turbo S - was held at Auto China Beijing 2008.

Porsche celebrates a year of growth with 14,785 new car deliveries to customers in the Chinese mainland, Hong Kong and Macau. This growth has resulted in China becoming the carmaker's second largest global market.

On April 19, 2011, the new Porsche Panamera Turbo S made its highly-anticipated World Premiere at Auto Shanghai.