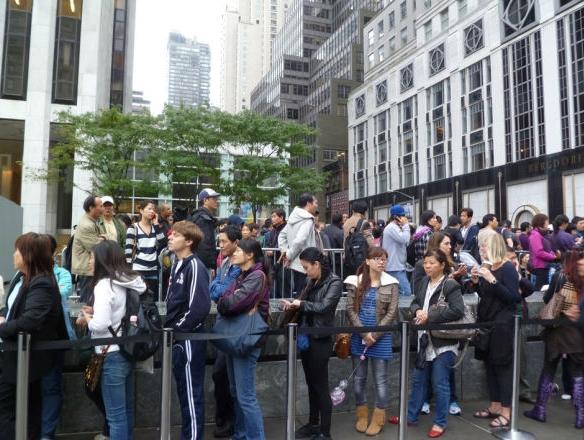 Number of people were seen lining up outside an Apple store on the Fifth Avenue of Manhattan in New York.

The iPhone 4S went on sale at Apple store on the Fifth Avenue of Manhattan in New York early Friday.

An Apple store worker said people were waiting outside the store around 3 p.m. Thursday and underwent an overnight rain for an early purchase of the smart phone which started sale at 8 a.m. Friday.

About 200 people were seen lining up outside the store and some of them said they would like to pay tribute to Steve Jobs, Apple's longtime CEO who died of pancreatic cancer at the age of 56 on Oct. 5.

People left a Steve's picture, flowers and apples on the sidewalk to pay respect to Apple's co-founder. Some apples were seen inscribed such words as "Nice job" and "We will always remember you."

The iPhone 4S is operated seven times faster than their predecessor and features an upgraded camera. Apple reported more than 1 million pre-orders for the iPhone 4S, breaking a mark set by last year's model. The phone also went on sale Friday in six other countries -- Britain,Germany,France,Australia, Canada and Japan.