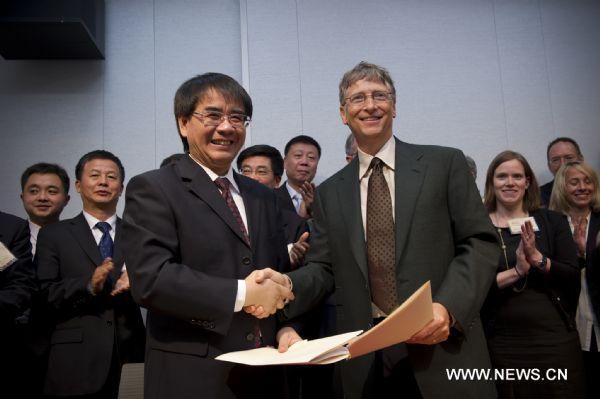 Zhang Laiwu (L Front), Chinese vice minister of science and technology, and Bill Gates (R Front), co-chair of the Bill & Melinda Gates Foundation, shake hands after signing the Memorandum of Understanding to establish cooperation on global health and agriculture initiatives, in Seattle, the United States, Oct. 26, 2011. The Bill & Melinda Gates Foundation on Wednesday announced a partnership with China's Ministry of Science and Technology to provide affordable health and agriculture solutions for the poorest countries and regions in the world. [Xinhua]


China's Ministry of Science and Technology signed a memorandum of understanding with the Bill & Melinda Gates Foundation to invest together in research and development of new products and technologies to help with global health and agriculture.

Under the $300 million project, for every dollar the foundation gives to support selected China-grown products and technologies that can help advance health and agriculture, particularly in the developing world, the ministry will offer $2 as grant money.

Human and animal vaccines, diagnostics for tuberculosis and other diseases, hardier varieties of rice and other crops, and more productive livestock are among the innovations likely to be considered first.

"Innovation to advance human welfare is a goal that China shares with the Bill & Melinda Gates Foundation and together we can do more to improve agriculture and health in some of the poorest nations worldwide," said Vice-Minister Zhang Laiwu at the signing ceremony in Seattle, the United States.

According to Zhang, this was the first time the ministry has formed a partnership in such fields with a foreign non-governmental organization.

Bill Gates, co-chair of the foundation named after him and his wife, said: "this partnership demonstrates the critical role that rapidly growing countries like China can play in driving innovation to reduce hunger and poverty.

"China's support to bring its power and capacity to bear on global health and agriculture research and production comes at a critical time in our world economic situation," Gates said.

Globally, many industrial countries have cut back on investment into research and development against the backdrop of a global recession but China has, instead, kept increasing its financial support for innovation in recent years, said Ray Yip, who heads the China efforts for the foundation.

Currently, China supports other developing countries like African countries mainly with cash, and cost-efficient technology and products would be added in the future, he added.

Liu Chang, a 29-year-old researcher at the medical school of the Tianjin-based Nankai University, said he was happy with the collaboration, which would bring new momentum and ideas to China's R&D and innovation.

He is researching how to make a virus that could kill HIV and the idea helped him land a $100,000 research grant last May in the fourth round of the Grand Challenges Explorations, a program by the foundation to promote innovation in global health.

"That was a huge surprise for me, as in China it's hard for a young researcher like me to get a research grant of this sum from the government," he told China Daily.

"I hope the partnership would bring positive changes to that and give more opportunities to us young researchers," he said.