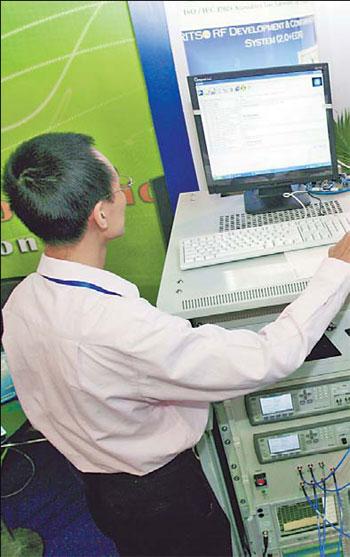 Blue Tooth testing equipment made by Agilent Technologies Inc at an Internet security technology exhibition in Beijing. The company is in cooperation with Datang Telecom Technology & Industry Group to do research and development work. [China Daily]


Agilent Technologies Inc, the world's biggest maker of scientific-testing equipment, has established a joint lab with a Chinese mobile equipment maker, part of its efforts to develop new testing products for future growth.

The US-based company has entered into cooperation with Datang Telecom Technology & Industry Group, an initiator of the fourth-generation (4G) technology standard, to do research and development (R&D) work for testing 4G products.

Agilent is one of the many companies trying to benefit from mobile network technological updates in recent years.

Sales of China's communications equipment industry reached 682.7 billion yuan ($106.9 billion) in the first eight months of this year, a year-on-year increase of 23.9 percent, according to figures from the Ministry of Industry and Information Technology.

China's three mobile carriers had spent 289 billion yuan on the third-generation network by April, according to the ministry. China began building its third-generation network at the beginning of 2009, when the government gave the three carriers licenses to set up the network. The growth of the mobile equipment industry has spurred that of the network testing market.

China is Agilent's second-largest market, after the United States, and "it won't be long" before it becomes the single largest market, said Mario Narduzzi, marketing manager of Agilent's China Communications Operation.

Agilent's revenue grew 13 percent year-on-year to $1.69 billion last quarter, 39 percent of which was from the Asia-Pacific region, 37 percent from Americas, and 24 percent from Europe.

The Asia-Pacific region will see its communications test equipment market expand at a compound annual growth rate of 8.4 percent from 2011 to 2017, according to research company Frost & Sullivan, which said overall revenues are forecast to reach $643.5 million by 2017.

Agilent, Rohde-Schwarz and Spirent Communications PLC are major players in China's network testing industry, especially in the high-end sector, according to the research company.

Earlier this week, Spirent said it will further expand its Chinese R&D center, whose staff has grown by 40 percent this year to more than 200 people.