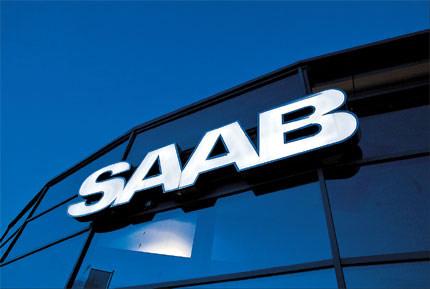 An illuminated logo is seen at a Saab AB dealership in Trolhattan, Sweden. Swedish Automobile NV yesterday said it has terminated an agreement to sell a major stake in Saab Automobile Co to two Chinese companies. [Shanghai Daily]

Swedish Automobile NV yesterday said it has scrapped an agreement to sell a major stake in Saab Automobile Co to two Chinese companies.

The company also said Pang Da and Youngman's new conditional offer for the purchase of 100 percent of Saab is unacceptable though discussions with the two companies are still going on, the statement added.

Pang Da and Youngman struck a deal with Swedish Auto in July to pay 245 million euros (US$352 million) for a combined 53.9 percent stake in Saab's parent.

On October 12, Saab received 100 million Swedish crowns (US$15 million) in a 70 million euro bridge loan secured by Youngman. But it was not clear whether it has got further funding from Youngman to tide it over until the Chinese government approved the investment.

"Saab is using Pang Da and Youngman to grapple as much as money they can but still it turns out to be not enough," said independent auto analyst Zhong Shi, "If Chinese companies are really interested in Saab's technology and brand, it's wiser to wait until Saab collapses."

Cash-strapped Saab filed for bankruptcy protection in the middle of September as it was short of funds to pay employees and suppliers. It halted production earlier this year.

Pang Da's chairman Pang Qinghua, who earlier said the original investment plan may not be valid since the court-administrated restructuring started, yesterday said: "We are looking at a variety of possibilities about new proposals."

But the termination of the deal has raised new concerns for Saab's fate.

Guy Lofalk, Saab's court-appointed administrator, has applied to a Swedish court to scrape the carmaker's restructuring despite private equity firm North Street Capital LP giving it a US$70 million funding on October 20.