Take, feel loud Islamic temple of the lane travel Xi an of China

Take, feel loud Islamic temple of the lane travel Xi an of China 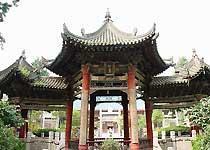 The ones that lie in the northwest corner of drum-tower of China Shaanxi Province Xi an melt to feel in the lane, one is with a long history, the large-scale Chinese hall type ancient buildings, it is Islamic culture and crystallization that the Chinese culture merged.
The mosque is Moslem s mosque. The place that sacred and serene in Moslem s mind. The unique architectural style of the large mosque makes it in Xi an modern architecture with high buildings and large mansions and many seeming when fly in the ancient hall of the eaves exceptional stressing of the ancient city, there don t be some conditions and customs.
It establish in will it be the first year of an era such as treasure day such as Emperor Xuanzong of the Tang Dynasty A.D. 742) ,And then rebuilted by successive dynasties, the existing building is mostly the styles of Ming and Qing Dynasties, the overall arrangement was rigorous, carved beams and painted rafter, solemn and quiet and tastefully laid out. It and large to study the intersection of lane and large temple Islamic and call most old two loud Islamic temple, Xi an of China. Because it in large to study lane to the east of the temple, so have another name called Dong Da temple, it is a provincial historic reservation unit now, it is one of the famous tourist hot spots of Xi an.
The temple faces east, the north and south is 50 meters wide, 250 meters long from east to west, fen enter the institute and cover an area of 12000 square meters four times, 7 wide Prayer Hall with a construction area of 4000 square meters, 9 deep, with an area of 1300 square meters, can hold 1,000 people and go on religious service at the same time. It is Islam temple with China s ancient architectural style. The intersection of Xi an and city have Islam now 14 of mosque, take, feel lane large temple Islamic among them largest most famous one. Should get to row in the courtyard of three passages in the temple, every institute have their own characteristics each, building primary and secondary is rationally distributed, the ones that are rich in the garden are interesting, reveal the spirit of creation that the Chinese working people have great originality. The plain sound of the duckweed of writer of famous Great Britain claims this temple is An old amazing temple . This temple is not merely the place of the week of market Moslem of Xi an now, and the main temple which receives Moslem and Arabic state leader visit and sightseeing.
Keep Song Dynasty famous the intersection of calligraphist and Mi Fu in the temple, Ming Dynasty famous the intersection of calligraphist and prosperous handwritten stone tablet their Dong, and the precious historical relic of Bowen monthly tablet,etc. going back and going through. These stone inscriptions have reflected the historical evolution of the temple, it is the valuable historical data which studies historical development of China s Islam too.
Enter the institute: Wooden memorial archway, five buildings; The second enters the institute: Stone memorial archway, carving dragon s tablet, imperial decree to build the monthly tablet of the hall towering; The third enters the institute: Save worry in the floor, expound doctrines and experiences in the hall; The fourth enters the institute: Phoenix s pavilion, officer s hall, Prayer Hall.