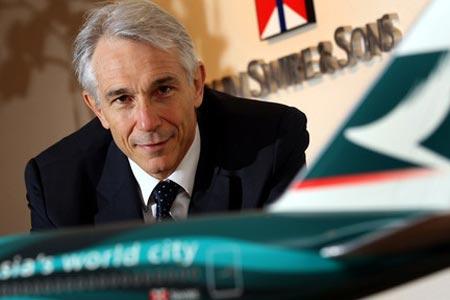 Tyler also said the recent cargo joint venture with Air China signifies a significant step for the company to expand further on the mainland.

However, as the two airlines prepare to take on the mainland market, they will face new competition from high-speed railways. The Ministry of Railways has laid down a blueprint to build 16,000 kilometers of new high-speed railways by 2020, providing high-speed rail access to over 70 percent of key cities, mainly in eastern and central China.

He added that the high-speed railways may have more direct impact on shorter haul flights, for example, between Guangzhou and Wuhan. Cathay and Dragonair flights on the mainland usually cover greater distances.

He argued that the high-speed rail lines will bolster airlines, as the new fast trains will help bring passengers of particular cities to airports for onward travel.

"You can see that happening in Frankfurt, Paris and Amsterdam. The railway link has been very positive," Tyler added.

In order to save costs amid sluggish passenger demand last year, Dragonair reduced services to Sanya and suspended services to Dalian, Guilin, Shenyang and Xi'an.

But as the global economy gradually recovered, traffic figures for Cathay Pacific and Dragonair improved in early 2010. The capacity of the two carriers increased 0.7 percent in February, while capacity to the mainland jumped 10.2 percent.

Despite the recent recovery, Tyler said the airline business remains very challenging. Passenger demand for premium seats, which accounts for a high proportion of total revenue, has been particularly hard hit by the economic downturn.

Although economy class bookings are closing in on 2008 peak levels, business traffic remains sluggish, 17 percent below 2008 levels according to the International Air Transport Association.

Tyler said premium passenger bookings aboard Cathay this year will depend very much on "the strength of the world economy, especially economic growth in China".

He noted most of Cathay's premium travel at present is driven by the financial sector. If financial services activity is robust and more companies are doing initial public offerings and other fund raising activities, premium travel between Hong Kong and different major financial cities around the world will increase.

Tyler said Cathay is considering adding new destinations and it will also start launching direct flights to Milan by the end of March.

"We are looking at places in the Middle East, North America, Southeast Asia and several cities on the mainland," Tyler said.

Tyler said the company is likely to improve business this year as the world's economy gradually picks up.

"We are planning a modest increase and low single-digit growth in capacity," he said.