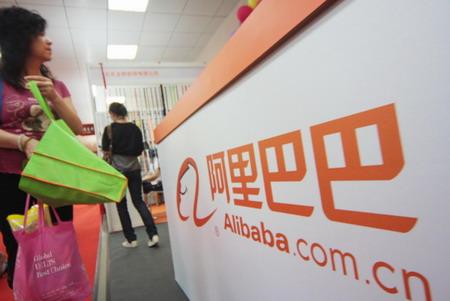 Alibaba.com promotes its brand at an Internet exhibition in Beijing. China's top e-commerce operator has been attempting to transform itself into a platform on which all processes of a business transaction can be made. [Photo: China Daily]

Alibaba.com Ltd, the Chinese e-commerce company shaken by revelations of fraud, is heading West as it rebuilds trust, courting entrepreneurs in the United States and investing in online companies.

About 200 people attended a three-hour conference at California's Stanford University this week to hear how the company is helping businesses to find Chinese manufacturers for their wares. Small businesses in the US, including peddlers of everything from bikes to light bulbs to ballet flats, are starting to tap Alibaba to find partners.

"In the US, nobody really knows about them," said Jonathan Shriftman, who began using Alibaba.com last year to find a manufacturer for inexpensive fixed-gear bikes. Shriftman resells the bikes on his own website, SoleBicycles.com. "If you have an idea, it's really easy to make stuff now."

Alibaba, based in Hangzhou, Zhejiang province, is aiming to lure people like Shriftman as part of its broader ambitions to grow beyond its home country. The company, which has about 60 engineers in its Santa Clara, California, office, has identified the US as its top investment priority. It bought Vendio Services Inc and Auctivia, both California-based companies, last year and is looking for more acquisitions, former chief executive officer David Wei said in an interview in August.

The Stanford seminar kicked off a tour of 15 Californian schools to help people jump-start international businesses. Many attendees were entrepreneurs, who asked venture capitalists on the panel for advice on business ideas. Many expressed an interest in using Alibaba's marketplace, which lets them search for manufacturers around the world, helping them to save money as they nurture their businesses.

Alibaba.com said it's turning to colleges after noticing that during the economic recession, many new users were students buying from suppliers to start their own companies.

As Alibaba courts US business owners, it will have to mend its image and rebuild customer confidence. The company's shares have tumbled 10 percent since the company said on Feb 21 that more than 2,300 vendors used its website to defraud global buyers. Wei and Chief Operating Officer Elvis Lee, who weren't accused of wrongdoing, resigned.

"If you want to start a business, Alibaba.com is a great launch pad for you," said Tami Zhu, who oversees the company's business development and marketing.

There aren't many companies offering similar services to US entrepreneurs, said Ryan Miller, an e-commerce strategist at DemandWare Inc, which helps companies run their websites.

Alibaba.com, whose parent also runs Taobao, an Internet-auction company that's similar to EBay Inc, is stepping up its expansion in overseas markets including the US, India and Japan to counter slowing customer growth in China.

It says it has no plans to target consumers and go head-to-head with EBay in the US.