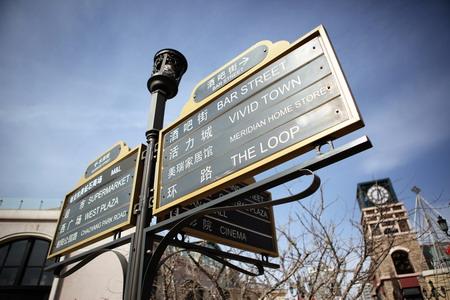 A route indicator board in Solana in eastern Beijing showing directions to bar street, the skating rink, the cinema, the shopping center and restaurants. Thousands of Chinese and overseas customers visit the venue every day, demonstrating its success as a model of good business in the capital city. [Photo: China Daily]

The Solana shopping and lifestyle park in east Beijing is proving to be a popular attraction with its European-style buildings, open spaces, a lake and twinkling, colorful lights at night.

Wang Wei, a 29-year-old lawyer who works at Fortune Center on the East Third Ring Road, often takes a 20-minute taxi there after work.

"When I step into the park and see the lake, I immediately calm down," Wang said.

He said he often walks beside the water and enjoys a cup of coffee in a caf or reads in a bookstore. Sometimes he goes to the cinema nearby with his friends.

"I do not come here specifically to see a movie or to go shopping, but the combination of the beautiful environment and culture do attract me," Wang said.

"Besides providing a pleasant environment, we knew we had to create something special to be outstanding," said Zhang.

The businesswoman said Solana opened in 2008 when the global financial crisis was at its most serious, and many proprietors of stores who had signed agreements postponed opening because of financial pressures.

Zhang and her team carried out the venue's first lights festival at the end of the first year.

The activity immediately appealed to customers nearby, so every month they now conduct festivals featuring different themes, furthering the area's fame. More than 60,000 people are often attracted to the events.

"With a total area of 130,000 square meters, Solana is located in the core area of Beijing CBD, Yansha business district and Lidu business circle, and is surrounded by three big diplomatic zones with many foreigners," Zhang said.

"There are many middle-class families living nearby, so we make an effort to serve the children, mothers and fathers first," Zhang added.

She explained that for a business real estate project, managers should think first of customers within 5 kilometers, then 10 kilometers and finally 20 kilometers.

Although retail accounts for 70 percent of Solana revenues, many commercial service clusters stand out in the park.

In addition to the large skating rink, there are classes for piano playing, martial arts, dancing and the English language.

"When children are skating, mothers can go shopping or have a facial at the beauty parlor, and fathers can choose to read in the book store," Zhang said.

Zhang said most of the brands in the shopping malls are international fashion labels, including Spanish clothing brand ZARA of Inditex and Australian footwear maker UGG.

"These fashionable brands always have different colors, patterns and materials, so customers should come to the stores and try something on," said Zhang. "This is our way of competing with online stores."

She said Inditex's Solana outlet will boast the most complete range of the fashion house's clothes later this year when Inditex releases four further lines at Solana.

This year more trendy stores will open in the center, selling clothes and furniture together.

"On positioning, we should concentrate on our customers, and family and fashion are our two essential considerations," Zhang said.

According to Zhang, the sales at the retail park totaled 2.5 billion yuan last year, and she thinks they will achieve a good performance in 2011.

"We feel confident because we have a distinctive culture and positioning, as well as customers with strong purchasing powers," she said.

"The upper middle class are the ones that are ready to buy a small apartment, that have a car, that think about leisure activities more," said Max Magni, head of the research company's consumer products practice in Greater China.