The Magic of iPad 2 Says It All

The Magic of iPad 2 Says It All 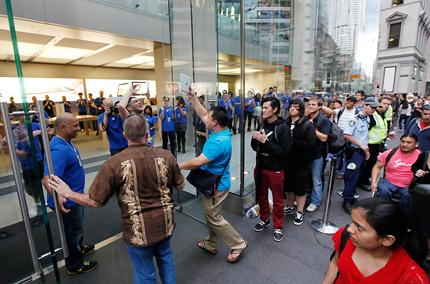 Apple Store staff in central Sydney welcome the first shopper waiting in line, Alex Lee (center) of Canada, the moment Apple's iPad 2 became available for direct purchase in Australia on Friday, March 25, 2011. Hundreds of customers lined up outside Apple Stores in Australia and New Zealand on Friday for the international launch of the iPad 2, which has flown off the shelves in the United States, leaving the company struggling to meet demand. [Photo: Shanghai Daily]

Apple may have envisioned its iPad being sold in futuristic wood-paneled shops in ritzy shopping districts, but in Hong Kong you're more likely to find them stacked up next to posters of bikini-clad models and burnt cigarette butts.

Enterprising Chinese businessmen have already found a way to cash in on Apple's iPad 2 before its official April launch in Hong Kong and Singapore, selling the gadget for a healthy markup and pocketing the difference.

Few customers looking at the iPad at the shopping mall located in Hong Kong's night life district seemed disturbed by the price tag, which goes to as high as HK$15,000 (US$2,000) for the top-end 64-gigabyte model, about 250 percent higher than prices in the United States.

"Those who want to buy it now are not going to look at the price," said the owner of a shop who gave his name as Eddie, as he stood in front of rows of iPads and a sticker of a Victoria Secrets lingerie model plastered on his laptop.

"Many of our customers are actually from China's mainland who want to impress their girlfriends or give it to business associates, and will buy 10 of them at a go."

The iPad 2, a thinner and faster version of the original tablet PC that features two cameras, was introduced in the US on March 11 and some analysts forecast that some 1 million of the new gadget may have been sold in the first weekend of its launch.

Eddie said his iPad 2 came from sources in the US who paid people to stand in line at shops on the day of the launch and had them shipped to Asia immediately, which all added to the cost of the machine.

Cheaper knock-offs running on Microsoft's Windows or other Chinese software were also available, but that had received little interest from consumers so far, he said.

"If I want a fake iPad, I can probably get those on the mainland," said Zhou Wen, a tourist from Beijing on vacation in Hong Kong.

"The prices of the iPad here are lower than back on the mainland, so many of my friends have asked me to help them get one too," Zhou said.

Consumers on the mainland unable to make the trip across the border to Hong Kong are likely to turn to Taobao, the eBay equivalent popular in China that is owned by the country's largest e-commerce firm, Alibaba Group.

A search on Taobao for iPad 2 turned up more than 5,500 hits, selling everything from the gadget itself to "Hello Kitty" stickers and covers designed for the tablet PC.

Many of the enterprising online merchants were also happy to offer services such as credit-card payment, a seven-day money-back guarantee and a 30-day warranty, all included in the device's price.

"We've already sold plenty of iPads and have many happy customers," said an online seller with the username Dulala in an e-mail. "This is the real thing."