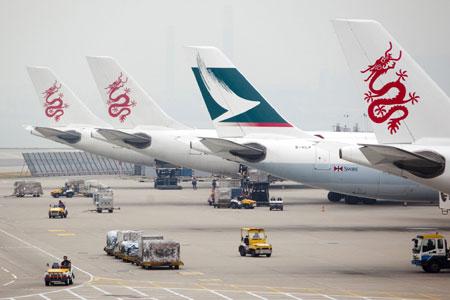 A robust growth in passenger and cargo services in the mainland are expected to provide a boost to Hong Kong-based Cathay Pacific Airways Ltd's operations, according to the company's chief operating officer.

"China's fast-rising economy and rapidly expanding international travel market has boosted by the rise of income levels means a greater challenge for us," said the carrier's Chief Operating Officer John Slosar in an interview with China Daily.

The rapid growth of international travel from China will probably be the most interesting story of the decade and the airline will take good advantage of the opportunity, Slosar said.

In 2010, the overall air transportation volume from the mainland was 267 million passengers and 5.57 million tons of cargo, a surge of 93 percent and 82 percent compared with 2005.

Cathay has a dominant share of about 43 percent of the passenger market, while it has a 20 to 25 percent share of the cargo market out of Hong Kong. The share in the world's biggest cargo market is not that high because of huge capacity and stiff competition, said Slosar.

Speaking about the launch of Air China Cargo - a joint venture between Air China and Cathay Pacific set up in 2010, Slosar said the cooperation will provide "fantastic opportunities".

"It means we have managed to build a fantastic cargo business here in Hong Kong which largely cater to the industrial Pearl River Delta region. Shanghai, or other Chinese gateways, can be developed by Air China Cargo," he said.

On speculation that manufacturers might move to different locations other than The Pearl River Delta, Slosar said the company will find ways to work with the shippers to make sure that their products can use the Hong Kong hub. "We must always do what the market requires us to do."

The airline delivered record 2010 results with net profit, turnover, passengers and cargo traffic touching an all-time high. Last year's profit of $1.8 billion meant Cathay Pacific was 'probably the most profitable airline' in the world. Last year Cathay and Dragonair carried 26.8 million passengers, up 9 percent from 2009, another record in the company's history.

"What attracts the customers is choice in the schedule. The aircraft is unlikely to change people's travel habits," he said. "So we focus on the schedules, to make sure we have convenient flights during the day."

For instance, to cities such as Beijing, Cathay along with Dragonair probably has six or seven flights a day; with Air China it is about 14 or 15 flights a day.

But trying to operate 16 A380s a day to Shanghai is impossible, Slosar said. "We try to pick the airplanes which will allow us to have the right schedules in the right markets," he said.