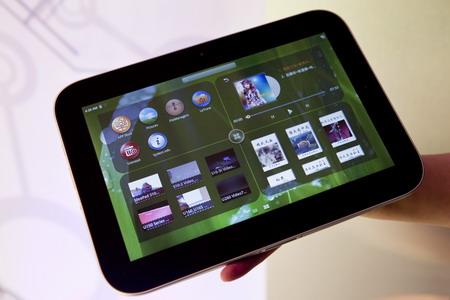 Since last year, Lenovo Group has been trying to diversify its product line by launching a series of new devices including the smartphone LePhone and the tablet computer LePad (above). [Photo: Bloomberg]

The Chinese computer maker Lenovo Group said on Thursday that it will launch its own television product in the "near future", as part of its recent efforts to expand outside the PC industry.

Yang Yuanqing, chief executive officer of Lenovo, said at a news conference that the company is working on an Internet-connected television platform that could be linked with its smartphones and tablet computers.

"Consumers nowadays are no longer satisfied with traditional television," Yang said. More than 10 million Chinese consumers will use Internet-based television in the next two to three years, he said, creating a huge market potential for companies such as Lenovo.

Lenovo has a 49 percent stake in the joint venture under the agreement.

"Lenovo's expansion into the television market is in line with the industry trend that the domination of the traditional personal computer is being replaced by new devices such as smartphones, tablet computers and Internet TV," said Simon Ye, an analyst with the research firm Gartner.

Ye said that although new devices will not significantly affect the sales of traditional computers this year, the effect will be "fundamental" in the long run.

Since last year, Lenovo has been trying to diversify its product line by launching a series of new devices, including the smartphone LePhone and the tablet computer LePad.

Yang said on Thursday that the traditional computer, mobile phones, tablet computers and television will become the four pillars of Lenovo's product lines.

Liu Jun, head of Lenovo's MIDH group, said at the news conference that the company's television product will debut within two years.

China's PC market grew by only 4 percent in the fourth quarter of last year, according to figures from the research firm IDC, after 15 to 20 percent growth in previous quarters. The slowdown is due mainly to the government's recent efforts to cool the economy.

Ye, from Gartner, estimates that China's PC market will achieve growth of about 10 percent this year.

Yang also said he is worried about a disruption in the supply of parts in the next quarter because of the Japanese earthquake. Yang said he expects both the delivery of products and the Japanese PC market to be effected. He added that Lenovo is still checking on the extent of the overall disruption.