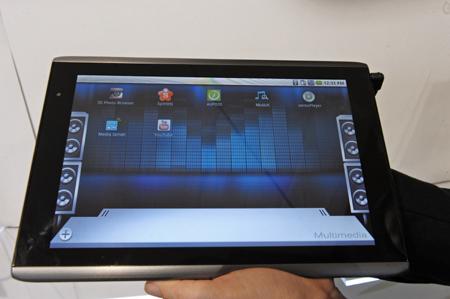 An Acer Inc tablet PC on display at the Mobile World Congress in Barcelona, Spain, in February 2011. [Photo: Bloomberg]

Acer Inc, the second-largest PC maker by market share, is aiming for the number two slot in the Chinese market and expects sales revenue to reach $2.5 billion, Oliver Ahrens, president of Acer China, told China Daily in an exclusive interview.

"The addition of Founder gives Acer very strong support to extend our business into the commercial PC segment, in which Acer had not done well compared with our consumer PC sector," said Ahrens.

He expects Acer's commercial PC sector to have a 20 percent growth. In addition, more than 600 new stores will be built in China this year.

Acer's global expansion plan began with a series of mergers starting in 2007. China, Acer's second-largest market by sales, is expected to increase its contribution to the company's global sales to 10 percent from the current 5 percent.

Ahrens said Founder's distribution channels have already penetrated into many small cities, on which Acer will place more emphasis to stir its sales this year.

In order to fulfill the goal of claiming the number two position, Acer has at least three strong rivals to compete with in the Chinese market - the leading domestic PC company Lenovo Group Ltd, and the multinational companies Hewlett-Packard Corp (HP) and Dell Inc, said Kitty Fok, vice-president of the research company IDC Asia-Pacific.

"This year will be an especially tough year for traditional PC makers in China, since the growth rate in the market will slow to 14.5 percent, 5 percent lower than the previous year," she told China Daily.

According to IDC, among the top PC makers, Lenovo led the market with about 30 percent of the market share, while Acer and Founder had 10 percent in total, HP claimed 10 percent and Dell held 9 percent by the third quarter of 2010.

"Acer and Founder's cooperation was the biggest news in China's PC market last year. I think this year is full of opportunities for Acer if the company maximizes Founder's advantages," said Fok.

To meet the company's goal in the Chinese market this year, Acer will place greater emphasis on marketing investment, extending product lines and focusing on sales in both urban and rural areas.

The company will invest $80 million in marketing this year, and will also be an official sponsor for the 2012 London Olympic Games.

Acer told China Daily that the company will launch its tablet PC products in the Chinese market in June. Compared with its rivals, Acer is a late starter in China. Lenovo launched its tablet PC last year with a price tag of 3,600 yuan ($547).

"Our aim is to dominate 20 percent of the non-Apple market in China," said Ahrens. "Acer has no reason to be scared," said Ahrens in response to the price reduction for Apple Inc's iPad.