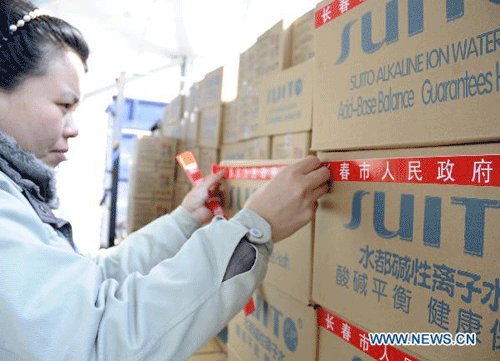 A staff member prepares the relief matierals at an airport in Changchun, capital of northeast China's Jilin Province, March 17, 2011. A total of 10 tonnes of drinking water assisted by Changchun City will be transported to quake-hit areas in Japan on Thursday. [Photo: Xinhua/Lin Hong]

China delivered ten tonnes of bottled drinking water to Japan's earthquake-hit areas on Thursday in the country's latest round of relief donations sent to assist Japan's rescue and recovery efforts.

The water, packaged in 800 boxes, was air-lifted from China's northeastern city of Changchun, Jilin Province, to Niigata in northeastern Japan on Thursday before it was taken by road to devastated Sendai, Miyagi Prefecture, said Duan Yingli, a foreign affairs official with Jilin provincial government.

Funds and other forms of aid have flowed from the Chinese government and the public after a 9.0-magnitude earthquake hit off Japan's northeast coast and triggered an array of disasters, including a massive tsunami, last Friday.

China sent a 15-member international rescue team to Japan, while the Ministry of Commerce said it is providing 30 million yuan worth of emergency humanitarian assistance.