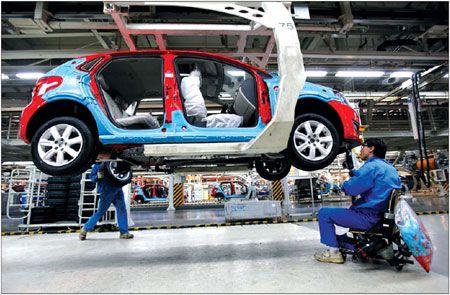 German carmaker Volkswagen Group plans to invest 14 billion euros ($19 billion) from 2012 to 2016 in new production facilities and products at its joint ventures in China. [Photo/China Daily]

German carmaker Volkswagen Group has again hiked its planned investment in China as it moves to consolidate its leadership in the world's largest auto market.

It plans to invest 14 billion euros ($19 billion) from 2012 to 2016 in new production facilities and products at its joint ventures in China.

The investment will come through the joint ventures' own funds, the automaker said in a recent statement.

The company's previous plan was to invest 10.6 billion euros ($14.3 billion) in local joint ventures from 2011 to 2015. The latest blueprint shows the vital role the Chinese market plays in Volkswagen's strategic plan to be the world's top auto manufacturer.

The company sold about 1.9 million vehicles in China last year, more than one fourth of its global sales.

Its China delivery this year is about to pass the 2 million-unit threshold, the company said.

The ventures have two new plants under construction in China, each with designed annual output of 300,000 vehicles.

The factory in Yizheng, Jiangsu province by Volkswagen's joint venture with SAIC will begin production late next year.

A facility in Foshan, Guangdong province by the partnership with FAW will start operation in 2013.

Combined annual Volkswagen production capacity in China is now about 2 million units and will grow to 3 million in the medium term, the company said.

The newest 14-billion-euro investment plan is not part of the carmaker's planned record spending of 62.4 billion euros ($84.2 billion) - the majority of it in Germany - over the next five years on new models and facilities. The plan was discussed and approved by the Volkswagen supervisory board in mid-September.

"Volkswagen Group is investing a record amount in forward-looking projects to achieve its goal of becoming the world's best automobile manufacturer in economic and ecological terms," said Martin Winterkorn, CEO of Volkswagen. "We will continue to extend our innovation and technology leadership," he said, noting "top of the agenda for us are investments in environmentally friendly, sustainable models and drives".

About 32.7 billion euros ($44.1 billion), 66 percent of the investment, will be spent on property, plants and equipment to modernize and extend the product range for all its brands, the company said.

The main focus will be on new vehicles and successor models in almost all vehicle classes. As well, new generations of engines will be launched offering additional enhancements to performance, fuel consumption and emission levels, it said.

The company also noted that it will continue to press ahead with the development of hybrid and electric engines.

Volkswagen plans to build electric cars in China beginning in 2013.

Both its joint ventures with FAW and SAIC are developing their own-brand electric vehicles.