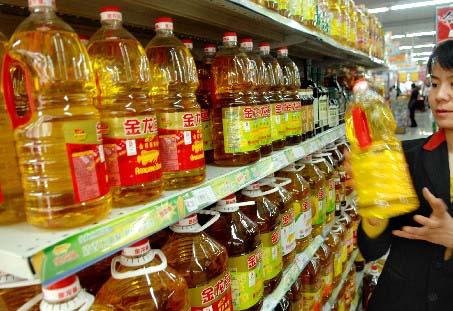 Edible-oil producing companies, which have both crushing and bottling operations, have been able to raise prices on bulk sales to large-scale users such as restaurants, reflecting higher commodity costs and inflation. [China Daily]

Price hikes for bottled edible oil are inevitable and an increase of about 5 percent could be accepted by the market, said an official of a State-supported think tank, the China National Grain and Oils Information Center (CNGOIC).

"The government's previous price-fixing efforts for bottled cooking oil were temporary solutions and will not last long, as price hikes for bulk edible oil never stopped in the past few months," Shang Qiangmin, director at the CNGOIC, told China Daily on Wednesday.

Edible-oil producing companies, which have both crushing and bottling operations, have been able to raise prices on bulk sales to large-scale users such as restaurants, reflecting higher commodity costs and inflation.

However, since these companies have been banned from hiking prices for the retail-bottled product, their profits have been under pressure, according to Wang Liangwei, an analyst at CNGOIC.

The government held sales of soybean reserves in April and May to five major edible-oil producers at below-market prices, but such sales are not a long-term solution, Wang said.

Rumors of possible price hikes for bottled edible oil began to circulate last month, when the price caps were due to expire.

But producers haven't yet raised prices because they need NDRC approval to do so, said Chen Lina, an analyst at Beijing Orient Agribusiness Consultant Co.

It didn't say when those approvals were issued, but it said that the authority had approved Yihai Kerry Investment Co Ltd's and COFCO's applications for a rise of about 5 percent.

Yihai, owned by Singapore Wilmar International Ltd, is the biggest edible-oil producer in China, accounting for about 50 percent to 60 percent of the market, while State-owned COFCO Group holds about 10 percent, said Wang.

If the news is true, it will spark a new round of price hikes among other cooking-oil manufacturers, especially small companies that have been harder hit by the price controls, said Chen.

It's hard to estimate how much effect the move will have on China's consumer price index, the main gauge of inflation, because the government has not disclosed the weighting of edible oil in the index.

Soybean oil is the major cooking oil consumed in China and its price is expected to rise due to tight domestic and international supplies. Other edible-oil prices are also increasing, analysts noted.

"Higher peanut prices have increased pressure on peanut oil manufacturers, and they will pass this on to consumers," said Wu Yuanjin, an agricultural products analyst with China International Futures Co Ltd.

Domestic peanut prices have approximately doubled since October to nearly 12 yuan a kilogram, reflecting commodity price inflation and reduced output in primary growing areas such as Shandong province, which have been hit by prolonged heavy rain.

"If peanut oil continues to be sold at the current rate, we will be out of stock before the Mid-Autumn Festival in September," Xu Pinghua, director of the publicity department of Shandong Luhua Group Co Ltd, told China Daily last month.