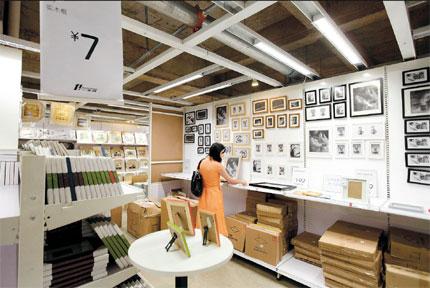 A customer selects photo frames at the 11 Furniture store in Kunming, in southwest China's Yunnan province, last week. The store, which resembles an outlet of Swedish furniture giant Ikea, is one of a number of Chinese businesses replicating the look, feel and service of successful Western retail concepts.[Shanghai Daily]


Nestling in a sleepy southern district of Kunming city in southwest China is a 10,000 square meter, four-story building that could make Swedish furniture giant Ikea uneasy.

11 Furniture, as the store is known, copies Ikea's blue and yellow color scheme, mock-up rooms, miniature pencils, signage and even its rocking chair designs. Its cafeteria-style restaurant, complete with minimalist wooden tables, has a familiar look, although the menu features Chinese-style braised minced pork and eggs instead of Ikea's Swedish meatballs and salmon.

This look-alike Ikea store is emblematic of a new retail trend in China. Increasingly sophisticated counterfeiters tend to replicate the look, feel and service of successful Western retail concepts - in essence, copying the entire brand experience.

"This is a new phenomenon," said Adam Xu, retail analyst with Booz&Co. "Typically there are a lot of fake products. Now we see more fakes in the service aspect in terms of (faking) the retail formats."

Brands are much more than a logo on a handbag or some half-eaten fruit on a computer.

Many of the most successful consumer companies have invested millions in promoting and building brands which encapsulate ideals, values and aspirations, creating valuable and loyal customer bases that sometimes border on the cult.

Last month, an American blogger set off a media storm after she posted pictures of an elaborate fake Apple Store in Kunming, selling genuine if unauthorized iPhones, MacBooks and other popular Apple products.

The presence of the fake stores in Kunming highlights China's seemingly insatiable appetite for Western brands in consumer segments that have not been tapped, particularly those in smaller cities far from the affluent eastern seaboard.

Hong Kong-based Torsten Stocker, a China retail analyst with Monitor Group, said: "What these fake stores indicate is that there is demand for the types of products and concepts that these brands sell."

The problem for companies that have been faked is that even if the fake stores sell genuine products, the brands have no control over how customers experience the brand.

Zhang Yunping, 22, a customer service representative at 11 Furniture, is used to the questions about Ikea.

"If two people are wearing the same clothes, you are bound to say that one copied the other," Zhang said, shrugging her shoulders.

"Customers have told me we look like Ikea. But for me that is not my problem. I just look after customers' welfare. Things like copyright, that is for the big bosses to manage."

Ikea said it has teams working at both the country and global level to handle intellectual property protection issues.

Ikea China told Reuters: "As one of the biggest home furnishing companies in the world, protecting Ikea's intellectual property rights is crucial."

At 11 Furniture - its Chinese name Shi Yi Jia Ju sounds very much like Ikea's Chinese name Yi Jia Jia Ju - furniture is made to order, not flat-packed as it is at Ikea.

Ikea has nine stores in China, most of them in the wealthier coastal and southern cities. Xiao Lee, a Kunming resident who was shopping at 11 Furniture for a bedroom wardrobe with her husband, has visited Ikea stores in Beijing and Shanghai.

She said: "I thought of shipping their products from the real Ikea store by cargo, but I thought that would be too troublesome so I came here.

"At the real Ikea, the layout is much neater and the decorations are laid out properly, you really cannot compare them."

Sometimes, telling the difference between fake and real is not so easy.

Ling Xiao and her mother shop at the Disney store about once a month and they have been going there for the past few years to browse for Mickey Mouse handbags and accessories.

Ling Xiao's mother, who declined to be named, said: "It should be real. It has been here a long time. I prefer coming to this store because it sells a big variety of toys."

A Walt Disney spokeswoman said there are more than 6,000 points of sale for Disney-branded goods in China. Disney confirmed the store is legitimate, declining to elaborate further.

Outside a Nike store on the same retail strip, Han Zhimei, a 17-year-old student, looked longingly at a "help wanted" sign posted in the store's window.

"I feel their stores have a spirit of teamwork and I really like the Nike brand," said Han, who sported a trendy asymmetrical haircut. Han stopped to apply for a job there.

When asked how she knows the store is a legitimate reseller and that the goods are real, she pauses before answering.

"Well, it is a Nike store, so the things in there should be real. I think people will be honest about these things and we should have brand loyalty," she said.

On Zhengyi Road alone, there are four Nike stores, all claiming to be legitimate. A check with Nike's store locator brought up three stores in that street, meaning at least one is fake.

A Nike spokesman said the issue of unlicensed stores was part of the broader challenge of combating counterfeiting in China.

"We take the protection of our brand very seriously and have a variety of protocols in place," a spokesman said.

The jumble of real and fake stores in -lower-tier cities across China makes it hard for companies such as Apple, Disney, Nike and, more so, Ikea, which are identified closely with their outlets, to exert control over their brand image.

Who protects your ipr?

Companies such as Starbucks have long battled copycats in China, but the shift to imitations such as those aping Ikea, presents a new set of challenges.

"The store is a key element of the brand, so faking it, in particular in a way that consumers do not recognize as a fake, is affecting the brand image and reputation," said Stocker.

Apple, which had its brand valued at more than US$150 billion earlier this year, declined to comment.

For those setting up the fake, unauthorized or pirated goods stores, the attraction is obvious.

"We do not need to advertise. Everyone has heard of Disney," said Dong, a 23-year-old store supervisor at a Walt Disney retail store a stone's throw from where Ling Xiao and her mother were shopping.

That brand recognition has far outstripped the ability of companies to expand fast enough to tap demand exploding in inland China.

Sportswear brands such as Nike, Adidas and Li Ning, which have been in China for many years, are the leading fashion choice for those living in less wealthy cities like Kunming, according to a Boston Consulting Group report last month.

As the world's second-largest economy races forward, the number of middle-class affluent households is expected to hit 130 million by 2020, from 50 million in 2010, BCG said.

These factors are fueling the race for brands such as Nike and Adidas to open stores in less wealthy Chinese cities. Ikea has said it will open an average of one to two stores a year in China.

"Many foreign brands are already aware of the importance of lower-tier cities but they are trying to figure out a way to go to market in there," said Xu of Booz&Co.

In some cases, beating them to the punch are the Chinese pirates, who, once established, may be hard for foreign companies to shut down.

Chinese law prohibits firms from copying the "look and feel" of other companies' stores, but foreign companies must register their trademarks with China and enforcement is often patchy.

Dan Harris, a lawyer with Harris & Moure and co-author of China Law Blog, said: "Foreign companies often expect the Chinese government to handle their enforcement for them, and though they sometimes will, they also sometimes will not.

"Problems arise from the fact that damages are often quite low and the Chinese courts do not have a lot of power to make sure their own judgments are enforced."

Back at 11 Furniture, it is apparent that copying Ikea's ideas may not be enough to win over all consumers.

Examining cushion covers at 11 Furniture, Zhang, a woman in her 50s, sniffs derisively.

"The designs do not look like typical Chinese designs. It is not what everyday Chinese people would use," she said, pointing to a checkered cushion cover.

"It looks too fancy."