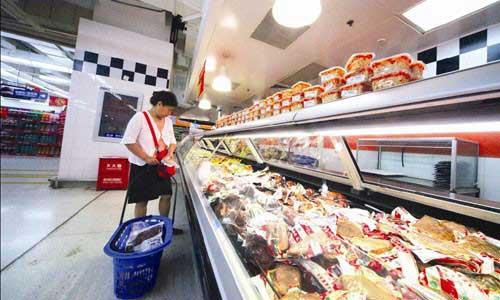 A customer chooses packed meat at a supermarket in Chaoyang district on Sunday. [Global Times]

Supermarkets and shopping malls in Beijing are required to install high-definition cameras as a deterrent to people who might poison the food, according to a new government regulation, which comes into effect on Monday.

Food counters in large and medium-sized supermarkets and shopping malls must use surveillance equipment that can clearly identify people's faces, says the regulation, established by the Municipal Public Security Bureau (PSB).

Small stores such as 7-Eleven are not included, although they also prepare food.

Surveillance videos at many supermarkets now only show an outline of people rather than a clear image, and it is difficult to investigate cases involving food poisoning, an employee with the PSB told the Beijing News.

The new regulation requires high-resolution surveillance equipment to be installed at important places such as accounting offices, warehouses, monitoring centers and elevators.

The cameras installed at food counters should be able to identify the faces and behavior of anyone that has handled the food, the regulation stipulates.

"We have high-resolution surveillance cameras all over our shopping mall, including in the elevators and along major passages," an administration department employee with the New World Department Store in Wangjing, surnamed Liu, told the Global Times on Sunday.

In November 2004, Yin Gang tried to blackmail 12 supermarkets, including eight in Beijing, by claiming he had poisoned food with pesticides. Yin was sentenced to six years in prison in 2005, the Legal Mirror reported.

Although no food was actually poisoned, the eight Beijing supermarkets lost more than 2.6 million yuan ($403,780) as they had to close to inspect any food that was suspected to have been poisoned, the newspaper said.