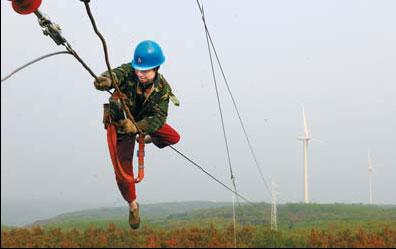 A worker connects power cables to a wind farm in Laian, Anhui province. The authorities will inspect wind-power facilities this month after technical failures were reported.[China Daily]


The State Electricity Regulatory Commission (SERC) will conduct nationwide inspections this month of wind power facilities after a series of large-scale disconnections that threatened the stability of the power grid.

SERC said on Wednesday that the inspections, which will run all month, will include wind farm safety management, operations, grid connections and the actual wind turbines.

The move follows four massive incidents in Jiuquan, Gansu province, one of the most important wind power bases in China, in which a total of 2,978 turbines were disconnected from the grid.

According to SERC, 35 equipment failures were reported in Jiuquan alone so far this year.

The absence of Low Voltage Ride Through (LVRT) systems in the facilities involved was cited by SERC as the main factor in these failures.

LVRT systems allow wind turbines to maintain continuous operation during and after precipitous voltage dips, so the grid can adjust more quickly. The systems improve overall grid safety and stability.

LVRT systems are required under the standards of China's largest power distributor, the State Grid Corp, which is in charge of power integration. But State Grid lacks the power to enforce the rule for wind farms that want to sell their output to the grid.

Though China has the world's fastest-developing wind power sector and the largest installed wind capacity worldwide, it still lacks a national standard on grid integration of wind power.

National standards, which are being jointly drafted by the National Energy Administration, SERC and State Grid Corp, are expected to establish fundamental rules for the wind power industry, requiring that all turbines be equipped with LVRT systems to ensure grid stability.

Most of the 34,000 installed wind turbines in China don't have LVRT systems. It costs between 10,000 yuan ($1,538) and 500,000 yuan to upgrade a single wind turbine to be LVRT-compliant, depending on the turbine model, industry experts said.

Xinjiang Goldwind Science & Technology Co, a leading turbine producer, said it is upgrading its machines to meet the anticipated technical requirements of the national standards.

The absence of LVRT systems is not the only possible reason for the system failures, said Qin Haiyan, secretary-general of the China Wind Energy Association. With that possibility in mind, the SERC inspectors will also order wind farm operators to install static VAR compensators, which regulate voltage.

Other major issues including wind power wastage will also be reviewed during the inspection, SERC said.