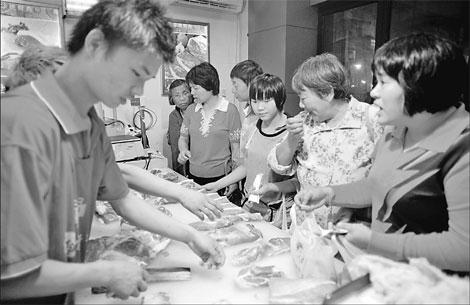 Consumers buy pork in a store in Yiwu, Zhejiang province. In some second- and third-tier cities, the price of pork rose above 30 yuan ($4.64) a kilogram. [China Daily]

The prices of pork and live pigs climbed higher than the record set in 2008 and will continue their rising momentum to the end of the year, analysts said.

Zhu Baoliang, deputy director of the economic forecasting department at the State Information Center, said he believed that prices are unlikely to fall before the end of the year.

"The growth period of a pig is about a year and a half. The prices of live pigs and pork touched a bottom in July and have been picking up since then. The prices will keep rising till the end of the year," Zhu told China Daily.

He added that the central government may have little chance to regulate prices. "Many pig farmers slaughtered breeding stock in the last production period because of losses from low prices and diseases. The government might slightly regulate the prices through the pork reserve, but pigs can't be fattened within six to eight months. So the prices will keep climbing before the next pigs reach the market."

Feng said the latest price rises started on May 2, when live pigs cost 14.8 yuan a kg. The price shot up by 23.7 percent in a month and a half. The main reasons are the growing cost of pig farming and the shortage of stock.

"Corn is the biggest force driving the prices of pork and live pigs higher and it reached a record high in March, before the pig and pork prices did," he said.

Growing labor costs are another factor force in the price rise. "The cost of labor went up by about 20 percent year-on-year. Migrant workers earned about 2,000 yuan a month last year, and their monthly wage is now between 2,500 and 3,000 yuan," Feng said.

Li Yongqiang, an experienced pig farmer in Beijing's Shunyi district, agreed that the cost of labor is challenging.

"I now pay the keepers 2,000 to 3,000 yuan a month. Even I were to offer 100,000 yuan a year, I would still have trouble hiring a breeding technician because few graduates are willing to work in the hot, dirty pigsties with no breaks."

The shortage of pigs came from the losses farmers suffered last year and diseases in the stock last year that drove many private pig farmers out of business.

Feng said he worries that the price increases for pork and pigs could also lift the prices of grains and vegetables.

"Sixty-five percent of China's meat is pork," he said. "People may end up turning to vegetables for alternatives, and that would raise their prices. The flooding in the south could further raise vegetable prices."

Feng rejected the idea that importing pork could help solve the problems. "China accounts for half of the world's pork production, with 600 million live pigs, while the Unites States, the second-biggest pig farming country, keeps about 100 million pigs. Importing two or three million tons of pork may only maintain the country's pork consumption for just half a month."