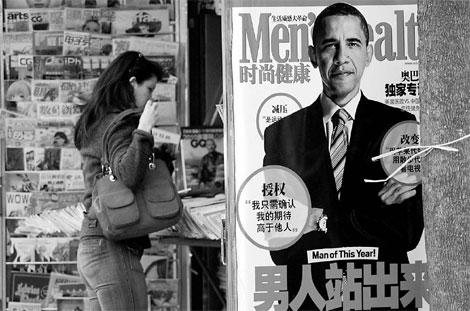 A newsstand featuring a men's magazine advertisement in Shanghai. Fashion magazines for men have enjoyed an annual growth rate of more than 30 percent in China since 2006.[China Daily]

Although watches might be considered old-fashioned and people tell the time with their smartphones these days, if you want to be really cool and up with it, you had better be seen with the latest addition to the Chinese urban man's accessories.

The 200-page full-color fashion magazine tailored exclusively for metropolitan man is the thing to be seen with in these trendy times.

Like bamboo shoots after a spring rain, these new publications, mostly owned and operated by foreign media conglomerates such as Conde Nast and Hearst, are bursting forth among the urban male elite, decades after women's fashion magazines took a dominant position on the middle shelves of street corner newsstands, bookstores and hair salons in cities such as Shanghai and Beijing.

Of the world's top media groups scrambling for a share in the new market in China, France's Hachette is the new kid on the block.

With a generous investment of tens of millions of yuan and "an elite editing team" of more than 40 people, mostly borrowed from the corresponding women's publication department, the company launched its first fashion magazine for men, Elle Men, in China.

"After so many memorable moments we have shared with Chinese women, we think it's high time for us to have a deeper communication with Chinese males," said Yang Wen, publishing general manager of Hachette China.

"The response is overwhelming, more than we expected," Yang told China Daily at a celebration of the magazine's successful entry into the market three months after the launch in early March.

According to a survey by KY-Research, a Beijing-based media analysis company, Elle Men enjoys the top sales ratings in cities including Shanghai, Beijing and Guangzhou, with an average market share of 40 percent, far higher than that of GQ and Esquire, which have been in China for years.

"People always like to ask why we came so late to the market. But we believe it's more about timing. Besides, if the product is good enough, there will always be a place for the producer, a bit like Apple's iPhone," said Yang.

Wu Zijun, a senior media industry analyst with KY-Research, said she thinks the prosperous high-end market has made a significant contribution to fashion magazines.

"The male's luxury market has provided a fertile ground for the growth of Chinese men's fashion magazines," said Wu.

Over the past five years, the female luxury market increased by 5 percent, while the growth rate of its male counterpart was 48 percent. Similarly, men's fashion magazines enjoyed an annual growth rate of more than 30 percent since 2006, and the trend is likely to continue in the next few years, according to Wu.

Although Hachette refused to reveal the advertising revenue of Elle Men, Yang said that the revenue of the first three issues was 50 percent higher than their expectations, and a large share of it came from luxury brands.

The situation seems to be to the liking of its readers.

"Of course I know there are a lot of advertisements in them. In fact, I believe that's one of the major incentives for more and more publishers to launch a men's fashion magazine," said Zhang Lerong, an editor from a major local web portal in Shanghai.

The 29-year-old bachelor said that he spends about 100 yuan ($15.43) every month on newspapers and magazines to "arm himself in both outlook and spirit". Half of the money, which can buy two different titles usually, goes to fashion magazines.

"These advertised luxuries have pictured a world that we have been working for, even though most of us cannot afford it right now. When we do, occasionally, like buying a watch for ourselves using our annual bonus, these magazines offer far better and more choices than the oft-repeated suggestions from our fathers, such as a Rolex or OMEGA," he added.

According to a readership survey conducted jointly by Elle Men and CVSC-TNS Research, men such as Zhang, whose monthly income is below 10,000 yuan, make up most of its readership, accounting for 45.5 percent.

The survey was carried out among some 700 men aged between 25 and 34 who have read Elle Men in the past three months, since the magazines was launched. It found that the average individual monthly income of its readers was 21,000 yuan - "a huge surprise" to the Hachette Group.

"We have always targeted our magazine at a high-end group, but we didn't expect it to be that high," said Yang, the publishing general manager.

The survey also reported some "interesting findings" that can help to describe the way Chinese men are living, as Yang put it.

For example, 60 percent of the readers polled are considering buying a new car or a new watch within two years. More than half of them have developed the habit of having a drink at bars or karaoke lounges after work for relaxation. And the average time a man spends in a shop is no more than 30 minutes

While Chinese men are quickly catching up with their foreign counterparts and their rapidly accumulating wealth and strong purchasing power - if indeed not surpassing them - their knowledge of fashion still lags far behind that of well-developed countries such as France and Italy.

"European men, especially the Italians, are known for their refined upbringing in terms of such things as fashion sense and brand awareness. In China, this only started coming about in the last two decades," said Yang.

Having taken the lead in launching the first ever fashion magazine, Elle, in China in 1988, Hachette now owns nine magazines in the country, including Elle Men, Marie Claire and Psychologies. In all, Hachette has about 2 million subscribers.

Before the introduction of its first men's fashion magazine, Hachette China enjoyed great success from the many millions of yuan it invested in Femina.

As the first weekly magazine specializing in women's fashion, the publication was well received by middle-class readers across the country, especially those from second- and third-tier cities. Many similar publications copied the model.

It is estimated that the market for the periodicals industry in China reached 20 billion yuan in 2010, with an annual output of 3.1 billion copies.

According to KY's research, among the more than 9,000 magazines in China, 40 percent suffer from poor management and only 1 percent of them have a circulation of more than 1 million.

But Hachette is free from such problems. It is estimated that the company has enjoyed 15 percent growth in the past three years and is likely to keep growing at a two-digit percentage rate.

"We are very satisfied with the running of Elle Men. We would like to see other male fashion magazines such as GQ and Esquire more as our partners than competitors," said Yang.

"In China, there is never a benchmark, and we are all pioneers."