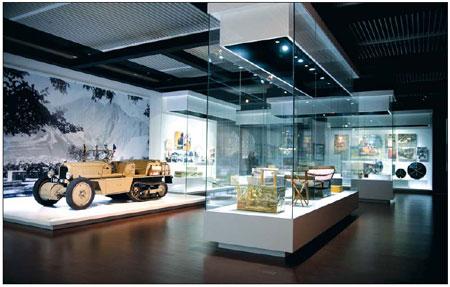 Some of LV's wildly creative designs from the past century are on display for the first time in China. [China Daily] 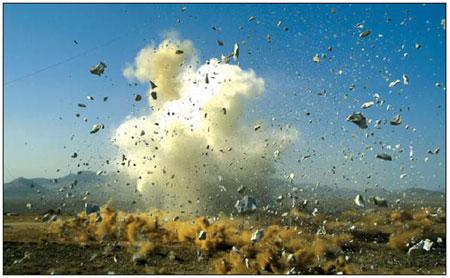 The Biginning, as Zhan Wang sees it, in this interpretation, that is on display.

Luxury Louis Vuitton's exhibition in the National Museum of China has been attracting Chinese who bring with them a mixture of curiosity and admiration about brands, since it opened on May 31.

This "Voyages" exhibition is the first time for a Western brand to make its statement in the newly renovated museum, and, just a prelude to other activities that celebrate the 20th anniversary of Louis Vuitton in China in 2012

Although the brand is seen by some rich Chinese as a symbol of wealth and social status, that is not at all the company is looking for. Instead, Louis Vuitton hopes to show how they interact with art in different historical periods.

"Louis Vuitton has kept alive that particularly French trait that skillfully blends tradition and innovation, making luxury a cultural heritage, and the fullest expression of a refined art of living," explained Yves Carcelle, chairman and CEO of Louis Vuitton.

The exhibition retraces the steps to the crowning moments in the history of the Malletier, since 1854, with 200 pieces of art that bear witness to the French art of life. Malletier is the French word for trunk maker.

Visitors are welcomed by the work of Zhan Wang, titeld "The beginning", depicting rocks being hurled by an explosion at the origin of the universe. This is meant to provoke people's thoughts about their relationships with the universe.

At exhibition hall No 2, there is a virtual hot air balloon trip to iconic figures, places, and objects that have shaped Louis Vuitton, from 1854 to the present day, to remind people of the glories of the past.

Then there is a mail trunk in striped canvas plastered with hotel labels as a record of the latter half of the 19th century, when transportation by land and sea was developing, and later by air.

This trunk is likely to give visitors a sense of peace, while enjoying the show, making them think of something cultural, rather than the frivolous, proud, and haughty sense associated with classic goods.

Louis Vuitton kept pace with the times and kept up with the planet's major discoverers, coming up with trunk designs that were on a par with people's dreams.

This multi-purpose travel companion offers extreme travelers a sense of comfort, ease of handling, and security as it was fitted with an unbreakable lock.

The inventiveness covers a wardrobe trunk, bed-trunk, desk trunk, even a completely "Vuittonized" mobile home - to provide something sensational for the visitors.

The classic brand's destiny has been affected by encounters with exceptional figures, and that too is part of the exhibition.

There is British artist Damien Hirst's surgical trunk of 2010, formed with twin trunks containing surgical instruments. It also shows butterfly, an important part of Hirst's design work, to give a mysterious, delicate effect.

There is also a Karl Lagerfeld's special order, which contains all the favorite tracks in his music library, meticulously fashioned to hold his iPods.

Other interesting exhibits include baby doll trunks and trunks for barbers. One futuristic project -a Mars trunk by Yuko Torii - envisions life on the far away planet, with a Louis Vuitton lifestyle.

China is seen as an important market for luxury goods. In fact, according to a recent report from market information company CLSA Asia-Pacific Markets, it is likely to be the world's biggest luxury goods market by 2020.

"It's our common wish to give the public a wider access to creation," Carcelle said during an earlier interview with China Daily.

An executive of the National Museum said that, by introducing these creative design elements, they hoped to provide some inspiration for China's creativity business.