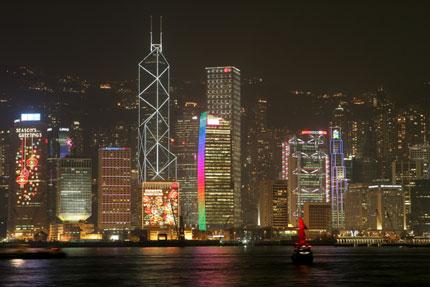 Buildings in Hong Kong's Admiralty and Central districts are illuminated at night. Hong Kong overtook Sydney as the world's second-most expensive city to lease shopping space after rents in the Chinese city surged 46 percent in the first quarter from the previous three months.[Shanghai Daily]

Hong Kong overtook Sydney as the world's second-most expensive city to lease shopping space after rents in the former surged 46 percent in the first quarter from the previous three months, according to CB Richard Ellis Group Inc.

New York remains the world's most expensive shopping district with average annual retail rents of US$1,900 a square foot, the Los Angeles-based real estate brokerage said yesterday. It is followed by US$1,697 in Hong Kong, which moved up from third place in the fourth quarter, and US$1,301 in Sydney. London is fourth with US$909.

Increased spending by cashed-up Chinese mainland tourists and the addition of new shopping venues have driven up prime street shop rents in Hong Kong. Mainland tourists visiting Hong Kong jumped 26 percent to 22.7 million in 2010 from a year earlier, according to the city's tourism board. The figure reached a daily record of 122,893 on April 30 this year, according to the board.

Cities in the Asia-Pacific region occupy eight out of the top 20 spots in the survey, including sixth-place Tokyo and 10th-place Melbourne. Guangzhou, Beijing and Shanghai also made it to the top 20.

"Economic growth continues to be strong in Latin America and the Asia Pacific, but is much weaker in Europe and North America," Ray Torto, global chief economist at CB Richard Ellis, said in the release.

Average rents in Asia-Pacific grew 11.1 percent in the first quarter from a year ago, the firm said. They were trailed by the 6.9 percent hike in the Americas and 0.5 percent growth in Europe, Middle East and Africa.