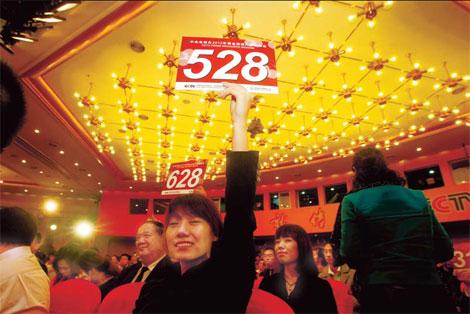 
The annual landmark advertisement auction by China Central Television (CCTV), the country's sole national TV station, drew record bids this year on Tuesday, boosted by major events such as the 2012 Olympic Games and widespread optimism about the business environment.

The auction, widely perceived as a barometer of the country's economic situation, drew bids totaling 14.26 billion yuan ($2.25 billion), up 12.54 percent from last year.

The auction, the 18th so far, attracted 245 domestic and foreign participants and lasted 12 hours. As of press time on Tuesday night, the winners hadn't been disclosed.

"The amount of money set a record for the 18 years," said He Haiming, vice-director of CCTV's advertising operations and management center.

According to He, notable bidders were liquor makers and e-commerce giants, as well as companies from the food and beverage sectors. There was also an increased presence of information technology and tourism companies.

He said that major entrepreneurs had marshaled their resources to bid for ad slots in a concerted manner, triggering fiercer competition.

"This year, we witnessed a concentration of rivals in the same industries, such as telecommunications operators China Mobile and China Unicom, dairy giants Mengniu and Yili, and so on."

Kweichow Moutai Co, the renowned Chinese liquor producer, splurged with a bid of 443 million yuan to win eight months of ad rights in the time slot ahead of Xinwen Lianbo, the nation's most influential news program.

The slots for the other four months were shared by two other distillers - JNC Group Co Ltd and Jiangsu Yanghe Brewery JSC Ltd.

The high-profile presence of liquor makers was in contrast to a government regulation limiting the airtime of liquor-related TV ads, said Michael Tang, chief executive officer and president of hdtMEDIA, a digital advertising company.

"The rules set by CCTV limit the number of liquor ads to two during prime time. No more than three liquor ads should be placed either before or after Xinwen Lianbo. This intensified the competition," Tang said.

China Mobile Ltd, Nike Inc and the JDB Group shared the sponsorship for key matches to be broadcast from the Olympic Games where Chinese athletes are thought to have a high likelihood of winning gold medals, forking out 79.99 million to 86.68 million yuan.

In 2010, the auction of prime-time ad slots raised 12.67 billion yuan in about 13 hours. The broadcaster generated 9 percent, or 40 billion yuan, of revenue in the TV ad market last year.

Traditional ads (excluding those on the Internet) generated 584.76 billion yuan of revenue in 2010, with 77 percent going to the TV market, according to the market researcher Charm Communications Inc.

However, the segment is increasingly threatened by marketing campaigns in the thriving new media landscape. Tang said that while the TV ad channel remained generally stable, newspapers might face a major downturn.

"China Mobile is poised to promote its 3G or 4G network, and the sportswear firm Nike is ready to cash in on the upcoming Olympic Games.

"But clearly, 12 percent growth is not a significant improvement ahead of such a major sports event," Tang said.