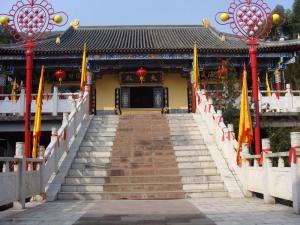 Great sorrow hall build on stone building above the base, fly to the eaves for 8 3, all build up with shelf pile of sets of brackets on top of the columns, look up in the sunk panel, unique and esthetic, rare for the similar building of China. Offering sacrifice to statue of Goddess of Mercy with different posture in the hall.