The figure marks the largest loan that any Chinese bank has ever extended to a private-sector company.

Of the loan, 2.45 billion yuan will be used to support the firm's aluminum extrusion project, and 4 billion yuan for its world-class flat rolling project, which is set to become operational in July. 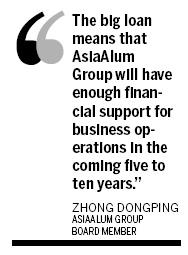 "The big loan means that AsiaAlum Group will have enough financial support for business operations in the coming five to 10 years," said Zhong Dongping, a member of the company's board.

The firm's flat rolling project will initially focus on prime-quality aluminum plates and strips for information technology, household appliances, vehicles and vessels, as well as for the printing and packing industries.

The project means it will become the world's third aluminum processing company to provide top-class aluminum products for the aviation and aerospace industries after Alcoa in the United States and Alcan in Canada.

However, as the global financial crisis brought the firm high liabilities and risks, AsiaAlum made a tender offer to buy back all its outstanding offshore debts with an aggregate face value of more than US$1.2 billion at deep discounts. This was rejected by bondholders including Merrill Lynch, as well as the hedge funds Och Ziff Capital Management and Stark Investments.

The firm later applied to a Hong Kong court for provisional liquidation proceedings and, last June, it approved the court for the management team's purchase of Asia Aluminum for US$475 million.

The firm eventually spent $110 million on the buyback of the offshore debts.