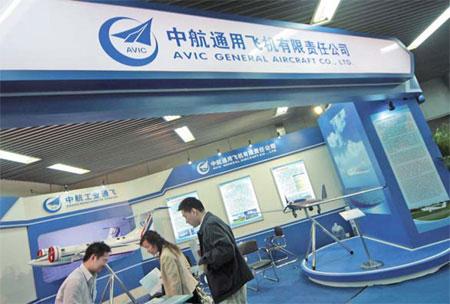 A booth of China Aviation Industry General Aircraft Co Ltd at an industrial show in Beijing. The company announced on Tuesday that it has signed an agreement to acquire Cirrus Industries Inc. [Photo: China Daily/ Wu Changqing]

China Aviation Industry General Aircraft Co Ltd (CAIGA) announced on Tuesday that it has signed an agreement to acquire Cirrus Industries Inc (Cirrus), the first acquisition of an aircraft maker that a Chinese aviation company made in the United States and Europe.

Cirrus is the second-largest manufacturer of single-engine general aviation aircraft in the world, behind Cessna, in terms of the number of planes delivered. General aviation refers to all aviation excluding military and commercial jets.

CAIGA President Meng Xiangkai said at a news conference CAIGA will have 100 percent ownership of Cirrus, but neither side would disclose the financial details of the transaction.

The deal is expected to be completed in April, but before that, it needs be approved by both the US government's Committee on Foreign Investment and China's National Development and Reform Commission and the Ministry of Commerce, Meng said.

"I don't see any reason that the governments will not approve the acquisition, because it is a strategic cooperation, a win-win deal that will be conducive to Sino-US trade and industries," he said.

For Cirrus, the deal will help to cement its leading position in the general aviation industry, he added.

Brent Wouters, president and chief executive officer of Cirrus, said in a news release, "This transaction will have a positive impact on our business and our customers because we share a common vision with CAIGA to grow our general aviation enterprise worldwide."

"CAIGA brings new resources that will allow us to expedite our aircraft development programs and accelerate our global expansion," he said, adding that the acquisition will allow Cirrus to jumpstart its program for production of the Vision Jet and develop new products.

Cirrus has delivered nearly 5,000 piston-engine airplanes to 58 countries and regions over the last decade, but there are only approximately nine Cirrus planes on the Chinese mainland, Meng said.

That number of planes will definitely grow rapidly during the coming years, he said, adding that CAIGA will engage in promotion of three Cirrus models and offer maintenance services on the mainland.

Moreover, CAIGA will also consider building a production line on the mainland to produce Cirrus planes at a lower cost, if demand in China and Southeast Asian countries warrants the move, he said.

The deal will also be highly beneficial to CAIGA, which will gain more access to the US, the world's largest general aviation market, which has more than two thirds of the world's total 330,000 general aircraft, he said.

China is regarded one of the world's largest potential markets for general aviation aircraft, because of its increasing population, large geographical area and expanding infrastructure.

The country had 1,010 registered small aircraft at the end of 2010, according to Li Jiaxiang, head of the Civil Aviation Administration of China. Last week, he forecast that the general aircraft fleet will "greatly increase" in the coming years following a proposal unveiled in November to relax low-altitude airspace restrictions within the next five to 10 years.

"I have confidence in the opening of the airspace, which will be implemented eventually but will take time. This needs much patience," according to CAIGA's Meng.

He said the Chinese company is planning a market listing by 2015.

The acquisition of Cirrus will be an important step for its global expansion plan, which aims to set up R&D, sales and service centers in China, the US and Europe. The company currently has its manufacturing base in Zhuhai, Guangdong province.