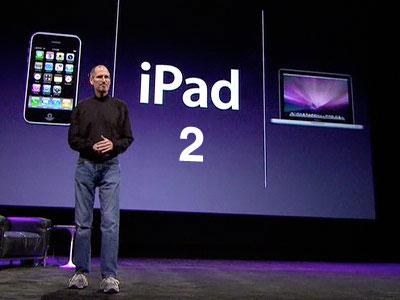 Apple Inc. on Wednesday unveiled the second generation of its iPad, in a move to stay ahead in the increasingly crowded tablet computer arena.

"We are introducing the iPad 2 today," Steve Jobs, Apple's chief executive officer, said at an event in San Francisco.

The new model is faster, thinner and lighter than the previous iPad that went on sale in April last year.

It features a new A5 chip. At a thickness of 8.8 mm and weight of 1.3 pounds (about 0.59 kilograms) , it is actually thinner than Apple's iPhone 4 smartphone.

The iPad 2 is equipped with both front and rear cameras, meaning users can use the device for video talking.

Jobs said the new version will support Verizon Wireless and AT& T, two of the largest wireless carriers in the United States which use different network technologies, from day one and will be shipping in both white and black colors.

The iPad 2 is scheduled to hit U.S. market on March 11, followed by other countries and regions on March 25 at a starting price of 499 U.S. dollars, the same as the previous generation.

According to Apple, it sold nearly 14.8 million units of iPad last year since it hit market at the beginning of April.