China to Crack Down on Salt Hoarding

China to Crack Down on Salt Hoarding 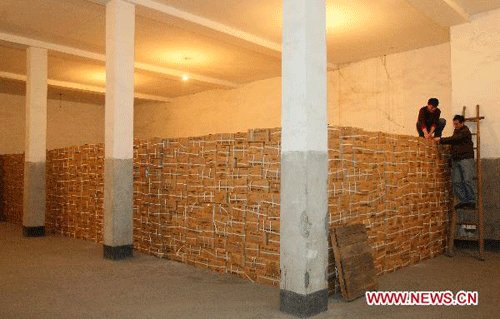 Staff members check boxes of salt at a warehouse in Zhuji, east China's Zhejiang Province, March 16, 2011. Some people believe that eating iodised salt could prevent themselves against some harmful radioactivity from leaks at a nuclear plant in Japan, which caused many residents rush to markets to buy the salt in China. Meanwhile, experts say that eating too much salt will lead to bad effects for human health. China National Salt Industry Corp. (CNSIC) on Thursday said China has rich salt reserves to meet people's demand and consumers need not panic to hoard salt. [Photo: Xinhua/Guo Bin]

China Has No Immediate Threat from Radioactive Leaks in Japan

China's top economic planner Thursday ordered crackdown on hoarding of daily necessities amid a salt panic spreading throughout the nation.

The National Development and Reform Commission said in an urgent notice issued Thursday that local price control authorities should counter rumors about shortages of daily necessities and hoarding of these goods.

It also pledged ample supply of daily necessities including salt, saying it would work with relevant agencies to meet market demand and maintain price stability.

Supermarkets in many Chinese cities have run out of salt as a wave of panic buying spred from east China's Zhejiang Province Thursday afternoon to Guangdong, Jiangxi, Guizhou, Sichuan, Jiangsu and Hubei provinces as well as the municipalities of Beijing and Chongqing.

Rumors in some Chinese cities say that radiation has leaked into the sea from the Fukushima Daiichi nuclear power plant, Japan, compromising the safety of salt taken from the sea in the future.

Another reason people have rushed to buy is that salt with iodine is believed to help protect people from nuclear radiation.