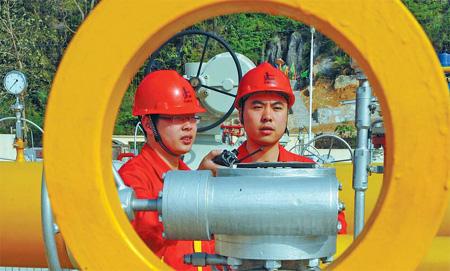 Swelling domestic demand for natural gas could lift China's foreign-dependency ratio for the less-polluting fuel to as high as 50 percent by 2020, industry experts estimate.

Rapid economic expansion and accelerating urbanization are providing strong support for natural gas consumption, making it hard for domestic production capacity to catch up, they said.

"We project that by the end of 2020, domestic demand will reach about 450 billion cubic meters (cu m), of which about half will be imported," said Pang Changwei, director of the Institute for International Oil Politics at the China University of Petroleum in Beijing.

He said that annual domestic production capacity might be near a peak of more than 300 billion cu m by 2030.

Natural gas imports doubled in the first seven months to 16.8 billion cu m, according to the National Development and Reform Commission.

"It's only a matter of time until imports account for 50 percent of domestic consumption," said Wan Xuezhi, an energy analyst at the CIC Industry Research Center.

During the 12th Five-Year Plan (2011-2015) period, demand for the fuel is projected to rise 25 percent a year on average, signaling that domestic consumption will exceed 260 billion cu m by 2015.

"The supply gap will surpass 120 billion cubic meters by the end of 2015. As such, we have no other choice but to increase imports."

Also, it will take time for China to improve its exploration and production technologies for unconventional gas such as shale gas and coal-bed methane (CBM), Wan said.

As China, the world's biggest energy user, has stepped up efforts to cut emissions, natural gas has become a key alternative to coal, a more polluting fuel source.

At present, the proportion of natural gas in China's primary energy consumption structure stands at about 4 percent, but that figure might double by 2015, according to Sun Yongxiang, a researcher at the Euro-Asian Social Development Research Institute of the Development Research Center of the State Council.

Even the projected 2015 level "would lag behind the world's average level of 24 percent at present", Sun said.

"The low price strategy has largely stimulated both the commercial and residential use of the gas. The demand surge is difficult to contain at current price levels," said Zhu Fang, deputy director of the Information and Marketing Department of the China Petroleum and Chemical Industry Association.

Zhu, however, said that the growth in demand wouldn't be sustained if natural gas prices rose.

China's reliance on natural gas imports in the future will not be as heavy as its dependence on crude oil, which reached almost 55 percent in the first half of this year, since the country is speeding up the exploration of unconventional gas resources to replace conventional ones, Pang said.

"We estimate that 50 percent is the ceiling for the foreign gas dependency ratio, given the large reserves of CBM," Pang said.

He added that China's recoverable CBM resources are estimated to be 11 trillion cu m.