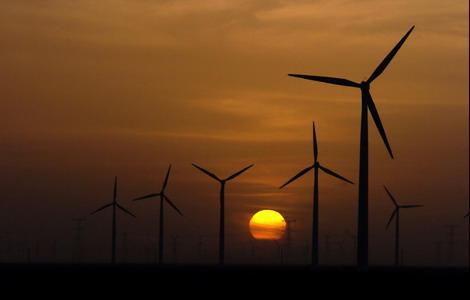 Gansu province had the second-largest installed capacity in the country at 5.5 gW at the end of 2010, and a potential additional capacity of 200 gW, according to the People's Daily.

The move came after incidents in the province's wind generation system where a total of 2,978 turbines were disconnected from the grid in four major cases.

Despite the incidents, Gansu's wind power development has been a model story in China.

Jiuquan, Gansu province, where 32 large wind farms are located, has been a popular site for wind power developers in China.

Project costs have dropped to below 4,000 yuan ($625) a kilowatt in Gansu, from 10,000 yuan during the industry's early days, making wind power generation a profitable business in Gansu.

The large wind power base has also attracted leading turbine manufacturers to Gansu, with a combined annual production capacity of 3,000 units.

Unlike the Inner Mongolia autonomous region, where a lack of grid connections are a key cause of wind power wastage, the grid in Gansu is being built out in conjunction with generation facilities.

Connected wind power contributes 16 percent of the total power generated in Gansu, compared with a national average of 1.2 percent.

The industry, along with Gansu province, is increasingly focusing on quality.

"The National Energy Administration (NEA) attaches more importance to the project quality and development pace in the wake of the inconsistency in the wind industry caused mainly by the excessive growth in wind project approvals, regardless of grid connections or electricity demand," said Shi Lishan, deputy director of the department of new energy and renewable energy at the NEA.

China's central government is tightening control of the wind power sector after five years in which the industry's installed capacity doubled each year, as the NEA attempts to unify and coordinate the sector with more central planning.

The NEA, established in 2008, has announced its first group of provincial targets under the new procedure, totaling 28.83 gW during the 12th Five-Year Plan.

The quotas, which cover 29 of China's 31 provinces, regions and municipalities, include all sizes of wind projects, the latest move by the central government to take more control of the industry.

Domestic media have reported that 93 percent of China's wind farms were approved by local governments.