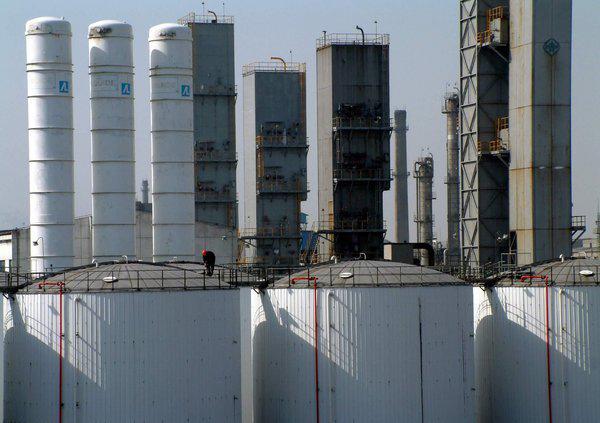 A worker works on the top of an oil storage tank. China's July oil imports fall to the lowest levels in a year due to falling international prices and decreasing and domestic inventory destocking. [CFP]

China's imports of crude oil in July unexpectedly hit their lowest levels on a daily basis in a year due to domestic inventory destocking.

Analysts blamed destocking for the drop in imports since the the National Bureau of Statistics said on Tuesday that crude oil processing rose 5.9 percent to 37.49 million tons in July from a year earlier.

James Zhang, analyst at Standard Bank, said: "The recent sharp drop in oil prices has echoes of 2008, when Brent peaked around US$147 per barrel before crashing down below US$40. This time however, in our view the oil market fundamentals remain in a much better shape than in 2008, judging from the market structure."

Customs data also showed China's copper imports hit 306,626 tons in July, an increase of 9.5 percent from June, but down 11 percent compared with a year earlier.

Prices for copper, along with other commodities, have fallen in the past week amid global market turmoil.

Standard Chartered Bank analyst Judy Zhu said she expects China to begin restocking copper this quarter due to seasonal demand and it could put a price floor under the metal.

The nation's iron ore imports rose 6.5 percent year on year to 54.55 million tons in July due to restocking, the customs administration said. Iron ore imports gained 7.9 percent on year to 390 million tons in the first seven months of the year, while average import prices for the key steel making ingredient, for which China is the top buyer, gained 39.1 percent to US$162.8 per ton, it said.