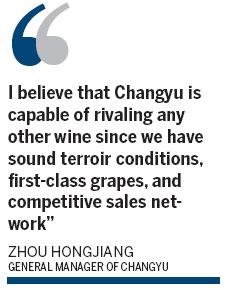 The world's wine producers have been looking for a bigger share of the Chinese market because of its immense potential among an increasingly aware population, in recent years.

Meanwhile, here at home, the Changyu Pioneer Wine Co Ltd, faced with an ever expanding array of overseas wines, has been working on convincing people that its wines can rival the world's best, from anywhere.

The company now has 16,666 hectares planted in grapes in the Xinjiang Uygur and Ningxia Hui autonomous regions, in Shandong, Shaanxi, and Liaoning provinces, and in areas around Beijing. These account for a quarter of China's grape-planting regions.

"The grapes from our six bases each have a different flavor, so they're used for different types of wine," Li Jiming, Changyu's chief engineer, said, by way of explaining why they cover such a large area.

Changyu has strict standards for planting with only 10 to 15 clusters of grapes kept on each vine to ensure each cluster of grape getting enough nutrition. And in the Chateau Changyu AFIP Global, only 266 vines are raised per mu, and the grapes from each vine are only be used to produce one bottle of premium wine.

In addition to ensuring grape quality, Changyu has spent a great deal on state-of-the-art equipment to produce a global winner.

It has an electronic tag for each bottle of its top wine so that customers can get more information on the wine, for example production, storage, and sales.

Changyu also has several chateaus, one of which, Chateau Changyu-Castel, was China's first to be built to international standard, in 2002, in Yantai, Shandong province, home of Changyu.

The company also opened an ice-wine chateau in Liaoning province, in the northeast, and Chateau Changyu AFIP Global, in Miyun county just outside Beijing, in 2006.

Another three chateaux are under construction in Shaanxi province and the Xinjiang and Ningxia autonomous regions, and scheduled for completion by the end of the year, all of them top grape-producing areas.

The company has also cooperated with four prominent chateaus to increase sales of its top wines overseas.

And its efforts have won some recognition. Yves Benard, the president of the International Organization of Vine and Wine (OIV), praised Changyu by saying that the Changyu Jiebaina is a strong brand with a long history. What's more important is that all of the judges approve of the wine's quality.

When Zhang Bishi, an overseas Chinese from Malaysia, founded Changyu in 1892, there was no way he could have dreamed that, 119 years later, Changyu would be known around the world.

But, in 1915, Changyu wines had already won four gold medals and quality certificates at the Panama-Pacific International Exposition, in San Francisco, California. This was the first time for a Chinese product to win an international exhibition award.

Now, thanks to Changyu, the coastal city of Yantai is the only Asian city to have been granted the "International Grape and Wine City" status by the OIV.

Thanks to their quality, Changyu wines are frequently served at state banquets and international summits, such as the opening ceremony of the Shanghai World Expo, last year, the welcoming banquet of the BRICS China summit, in Hainan, this past April, and the G20 seminar on an international monetary system, in Nanjing this March.

China is now the world's seventh largest producer and consumer of wine by volume and is likely to become the sixth largest consumer by 2014, according to Vinexpo research published in March.

China's wine market is still expanding, as the standard of living continues to improve.

One 2011 forecast shows wine consumption in China undergoing a large increase over the next five years, with yearly per capita consumption at one liter, in 2012.

However, that is still in the future. Consumption in China is still much lower than the 6 liters that is now the world average, but that indicates the huge potential.

The Chinese wine market has attracted producers from Europe and the Americas, and this has made the market here a bit complicated, if not chaotic.

Still although Chinese wine producers face stiff challenges from overseas brands, the domestics account for 85 percent of the market here.

And, one major force among those domestic wines is Changyu, with a market share above 20 percent, for several years running.

Zhou Hongjiang, general manager of Changyu, concludes with this, "I believe that Changyu is capable of rivaling any other wine since we have sound terroir conditions, first-class grapes, and competitive sales network."