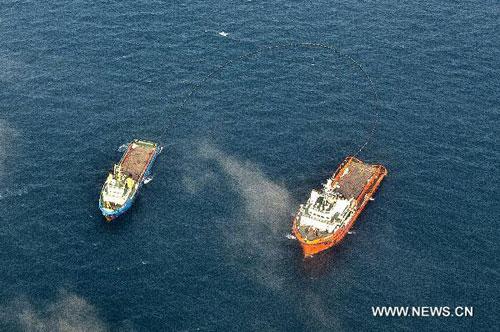 Two vessels clean up leaked oil on the sea surface around the C platform of the Penglai 19-3 oilfield in Bohai Bay, July 11, 2011. China's State Oceanic Administration (SOA) has urged investigators to speed up the handling of the oil leak at the B and C platforms of the oilfield in Bohai Bay that is being operated by the ConocoPhillips China (COPC).

China's maritime watchdog said on Tuesday that it plans to sue ConocoPhillips China for oil spills in Bohai Bay that caused widespread environmental damage, the first litigation of its kind by a government agency.

The North China Sea Branch of the State Oceanic Administration (SOA) will file the lawsuit against companies responsible for a series of spills that began in June, the SOA said in a statement.

It also dismissed media reports on Tuesday that ConocoPhillips China, a subsidiary of Houston-based US energy giant ConocoPhillips, will be fined 100 million yuan ($15.6 million) for the spills, saying that the amount had not yet been determined.

The SOA earlier said that the maximum fine for maritime pollution is 200,000 yuan under Chinese environmental protection law.

A spokeswoman for the US firm refused to comment on the possible lawsuit.

"We are in constant communication with the SOA. We cannot comment on speculation about possible future action that the SOA may take," Donna Xue, spokeswoman for ConocoPhillips China, said in an e-mail to China Daily.

The US company, the operator of the Penglai 19-3 oilfield in Bohai Bay, said on Aug 12 that 2,100 barrels of oil had leaked since the first spill was observed in June.

The operation of the oilfield is in partnership with the China National Offshore Oil Corporation (CNOOC), the country's largest offshore oil producer.

ConocoPhillips China also said it expected to clean up the mess by the end of August, a deadline set by the SOA.

Both the SOA and environmentalists have criticized the company for its inefficiency in stopping the oil spills that have polluted 840 square kilometers of sea.

ConocoPhillips China said in a statement on Tuesday that oil was seen bubbling from the seabed near Platform C, where a spill was first spotted on June 17.

It's a very encouraging move, as the SOA can collect first-hand information to evaluate the environmental damage, said Ma Jun, director of the Institute of Public and Environmental Affairs, a non-profit organization based in Beijing.

Ma said that the institute will monitor the situation and see if the SOA can make litigation procedures open to the public.

"A lot of people are watching the SOA to see how they will protect the interests of the Chinese people," Ma said.

Fishermen in Hebei province, who claimed that the spills had wreaked havoc on supplies of scallops, have also sought the services of a law firm in Beijing to sue ConocoPhillips China.

Meng Xiaojuan, a lawyer from Yingke Law Firm, which represents about 160 scallop farmers in Hebei's Changli and Laoting counties, said the farmers' losses were estimated at 500,000 yuan to 1 million yuan each.

"We will join forces with other parties to put pressure on ConocoPhillips China to compensate these farmers for their losses," Meng said. She added that the firm will convene with experts on Aug 24 to work out a detailed plan.

Jia Fangyi, a lawyer from Great Wall Law Firm, held a news conference on Tuesday to announce that, on behalf of Chinese citizens, he has sent files to Tianjin Maritime Court, Qingdao Maritime Court and the High People's Court of Hainan province on Aug 9 to sue ConocoPhillips China and CNOOC for sea pollution and failure to notify the public once the accidents had occurred.

He also asked both companies to set up a 10 billion yuan fund for improving the environment and compensation.

Jia said both Tianjin Maritime Court and Qingdao Maritime Court responded positively to the lawsuits. "It's never too late to use the legal system to punish those who polluted our sea," Jia said.