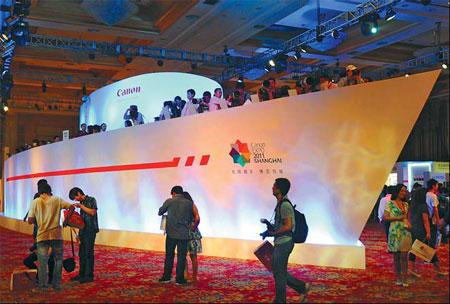 A display at the Canon Expo 2011 Shanghai in May. The camera maker plans to increase the number of sales employees in China from the current 2,000 to about 10,000 within the next five years. [China Daily]

Canon Inc, one of the world's largest camera makers, will have its camera factories fully back in operation by October as it overcomes disruptions caused by the giant March earthquake, an executive said in an exclusive interview with China Daily.

Tatsuo Yoshioka, vice-president of Canon China and general manager of the company's Imaging Communication Products Group, also said the company aims for an annual growth rate of 30 percent in China.

Canon's Japanese factories, damaged in the March disaster, resumed operations in June. However, Canon said some electronic component providers haven't completely recovered, so some camera models are still in short supply in China.

The company has denied it might move production facilities and parts providers to neighboring countries, including China.

Canon's second-quarter report showed a decline in net income from 67.6 billion yen ($869 million) the previous year to 53.86 billion yen because of the supply chain disruption caused by the quake and the appreciation of the yen against the dollar.

After the quake, retail prices for Canon products surged on concerns about shortages.

Yoshioka told China Daily that the company did not change the prices charged to distributors, and the company expects to see average annual growth of 30 percent in China during the next five years.

"Because of the earthquake, we did not meet our 30 percent growth target in the first half of 2011, but we will try very hard to achieve the target this year," Yoshioka said, adding that the company lost 197.4 billion yen as a result of the earthquake.

He added that in the past five years, Canon sold about 70 million cameras in China.

However, compared with the country's 800 million cell phones and 400 million television sets, cameras still have huge potential in the Chinese market, he said.

Yoshioka said that in China, many people are still unfamiliar with the Canon brand.

However, the company's middle- and high-end professional cameras are the best-sellers in the country because Chinese enjoy taking high-quality pictures, he said.

In 2010, 1.6 million professional cameras were sold in China. Yoshioka forecast the number will be 2 million this year.

Although professional cameras only account for less than 30 percent of total camera sales, Yoshioka estimated the sector will grow faster as quake-related problems end.

Most of the affected Japanese companies will resume normal operations in the third quarter, according to the US-based company iSuppli Ltd.

In 1989, Canon China established itself as a wholly foreign-owned enterprise in Dalian, Liaoning province.

However, it didn't expand aggressively until 2001, when China joined the World Trade Organization.

"China surpassed Japan to become Canon's second-largest market two years ago. Our sales target for China this year is the highest ever," Yoshioka said.

He said he is under huge pressure, since his division contributes a large part of the company's total revenue.

Since 2001, Canon's camera business in China has achieved an average annual growth rate of about 30 percent.

According to a report in May, the company plans to increase the size of its sales team in China from the current 2,000 employees to about 10,000 within the next five years.

Canon holds the largest market share in China, surpassing its Japanese peers such as Nikon Corp and Sony Corp, and it will place more emphasis on third- to fifth-tier cities this year to boost sales and fulfill its growth target.