China not yet ready to cut oil product prices: NDRC

China not yet ready to cut oil product prices: NDRC 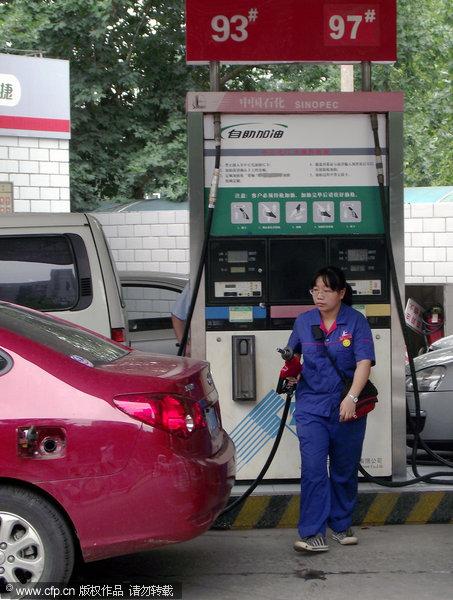 The Chinese government will not lower oil benchmark retail prices for the time being, as conditions for price cuts have not yet been met, the nation's economic planning agency told Xinhua Monday.

The remarks were made by an official in charge of the pricing department of the National Development and Reform Commission (NDRC) in response to claims by the public that China's current domestic prices fail to reflect falling international crude oil prices.

Global oil prices plummeted recently on concerns that the negative impact of a prolonged U.S. debt crisis and fears of a double-dip global recession will sap oil demand.

China's current oil pricing system was introduced in May 2009. The system gives the NDRC the right to adjust domestic fuel, diesel and gas prices when average prices for Brent, Cinta, and Dubai crude oil move by 4 percent within 22 consecutive working days.

"Average prices in the three markets are still above the level of April 7, when the NDRC previously hiked prices. Therefore, we are not yet ready for more price cuts," the NDRC official said.

He said that although global oil prices registered steady increases within the month of May, the NDRC did not raise domestic oil prices because of soaring production costs for the country's oil refiners.

China's refiners have long complained about rigid oil product prices and volatile crude prices creating uncertainties for their businesses. The government gives handsome subsidies to major refiners such as Sinopec and PetroChina in compensation for their annual losses, as oil prices have a strong bearing on social stability in China.

Oil prices have been increasingly sensitive recently as a result of the country's stubbornly high inflation rate. China's Consumer Price Index (CPI), a major gauge of inflation, hit a three-year high of 6.4 percent in June.

Only April 7, the NDRC announced that it would raise retail prices for gasoline by 0.37 yuan per liter and diesel by 0.34 yuan per liter. The announcement marked this year's second increase.

Due to rising international crude oil prices and mounting domestic inflation pressures, the NDRC said it had "properly postponed" the timing of the price increases and also limited the amount of the increases.

Although the government has not adjusted benchmark retail prices, wholesalers in some regions have already reduced prices for their oil products.0 Wholesale prices for oil products in southwest China's Chongqing Municipality declined by 300 yuan per metric ton in July.

Major oil companies, including PetroChina and Sinopec, have lowered wholesale prices by 30 to 100 yuan per metric ton in the cities of Shanghai, Nanchang and Fuzhou.

An NDRC official said the price changes reflected market realities and are compliant with the government's macroeconomic regulations. The official cited lower import tariffs for oil products that have been in effect since July 1, as well as higher domestic fuel output, as reasons for the wholesale price reductions.

Some of the China National Petroleum Corporation (CNPC)'s service stations have reduced their gasoline retail prices by as much as 0.34 yuan per liter in Shanghai.