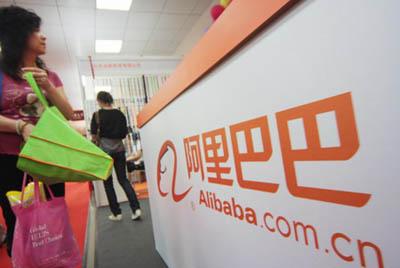 Alibaba.com promotes its brand at an Internet exhibition in Beijing. China's top e-commerce operator has been attempting to transform itself into a platform on which all processes of a business transaction can be made. [Photo: China Daily]

China's top e-commerce operator, Alibaba.com Ltd, has bought a 25 percent stake in a Chinese export-services software maker in an effort to improve customer service and fend off fierce competition.

Alibaba.com, an online platform for trade between businesses, paid 170 million yuan ($26 million) for the investment in Sinosoft Technology Plc, according to Alibaba.com spokeswoman Linda Kozlowski on Monday.

"We saw this (the investment) as having good synergies with our customer base," she said, adding that more than 2,000 of Alibaba.com's customers are using Sinosoft's technology.

Alibaba.com made the investment before the Spring Festival holiday.

"With the investment, Alibaba.com can improve its membership package and expect better sales," said Wallace Cheung, an analyst with Credit Suisse.

The company plans to increase revenue by encouraging its customers to use value-added services.

"It also reflects Alibaba.com's change in strategy, that is, the change from 'meet at Alibaba' to 'work at Alibaba'," Credit Suisse's Cheung added.

Alibaba.com, which has primarily focused on information between buyers and sellers, has been attempting to transform itself into a platform on which all processes of a business transaction can be made, instead of being simply an information display platform.

The company hopes the move will help to fight off fierce competition from rivals, such as Global Sources and DHGate.

The company's investment in Sinosoft came after it purchased five companies in the past two years in order to carry out its "work at Alibaba" strategy.

The purchases included US-based Vendio, which offers e-commerce services similar to Alibaba's in the United States, and Auctiva, which develops eBay's auction-management software.

Alibaba.com took up almost 70 percent of the market in 2010, followed by Global Sources, with close to 5 percent, said Analysys International.

Another Chinese Internet giant Tencent Holdings Ltd also said last month that it has set up a 5 billion yuan fund to invest in technology companies, targeting those that develop Internet services such as online games, social networking and electronic commerce.