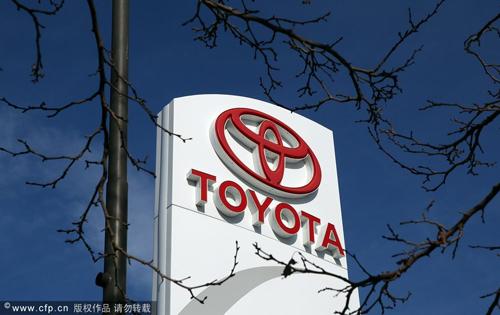 A sign is displayed at Toyota of Marin on January 26, 2011 in San Rafael, California. Toyota is recalling nearly 1.7 million vehicles for defects that may cause fuel leakage in Toyota's luxury brand Lexus as well as other makes and models around the globe. 255,000 Lexus IS and GS models in North America are affected by the recall. [Photo:CFP/Getty Images/Justin Sullivan]

The financial results released on the automaker's official website also posted the operating profit of 422.19 billion yen, up 708.0 percent, on sales of 14.35 trillion yen, a rise of 5.0 percent, in the April-December period.

For the October-December quarter, Toyota's operating profit was 99.07 billion yen, down from 189.1 billion yen booked a year earlier, but above median economists' expectations. The automaker's third quarter net profit fell 38.9 percent from a year earlier to 93.63 billion yen, the firm announced.

It recorded a 47.6 percent drop in quarterly profits, citing a strong yen as adversely affecting sales in overseas markets.

For the full fiscal year to March 31, however, Toyota raised its annual operating profit forecast to 550 billion yen from 380 billion yen, after its nine-month profit exceeded the original figure.

"Strong vehicle sales, especially in emerging markets such as Asia, Central and South America, and Africa, contributed to the increase in operating income in the nine-month period," the automaker's Senior Managing Director Takahiko Ijichi said. "These regions are now increasingly representing one of the pillars supporting our earnings."

And citing increasing sales in Japan, Asia and Russia and due to the implementing of a number of cost-cutting initiatives, Toyota said it forecasts sales of 19.2 trillion yen, up from an earlier forecast of 19.0 trillion yen and expects worldwide sales to rise to 7.48 million units, from a previous projection of 7.41 million units made in November.