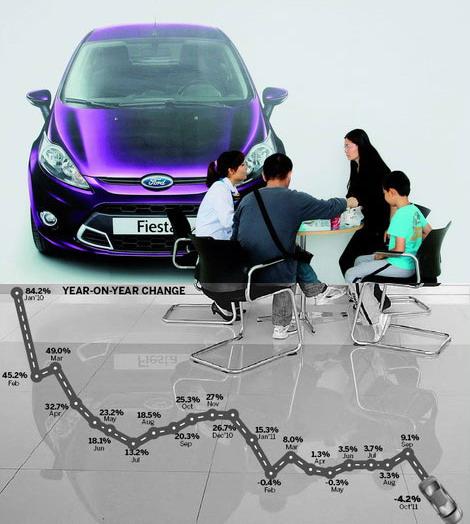 Car shoppers at a Ford dealership in Nanjing seek information from the sales staff. [China Daily]

Passenger vehicle sales in October showed the steepest year-on-year decline since 2008, as the government tightened up its 2-year-old subsidy policy for fuel-efficient models.

The figure compared with average year-on-year growth of 4.4 percent in the first 10 months.

"The Golden Week (national day) holidays, the cooling economy and the rebound of gasoline prices on the world market all led to a sales decrease in October," said Rao Da, secretary-general of the association. "The withdrawal of subsidies for most fuel-saving vehicles helped produce the largest negative growth."

The Ministry of Finance altered its 2-year-old subsidy policy for fuel-saving vehicles, making more than 70 percent of the original 427 models ineligible for the subsidies, effective Oct 1.

"The total passenger vehicle production of 1,248,803 units, which grew by 5 percent from a year earlier, increased pressure on auto makers' inventory in October," said Rao.

"Inventories will continue to increase in November, as we believe that this month's sales will also decrease from last year's number, and maybe even with a bigger negative growth rate."

Rao said that China should not halt support for energy-efficient vehicles but instead should "further encourage the use of smaller engine capacity vehicles".

Chen Qingtai, a senior researcher at the Development Research Center under the State Council, agreed with Rao.

"The government should frame policies to promote the wide usage of fuel-saving and smaller vehicles," said Chen.

According to Chen, in 2010, only 6 percent of new passenger vehicles had engine capacities of 1.0 liter or lower. In Japan, by contrast, the proportion had already reached 37 percent by 2008.

Moreover, the average fuel consumption of passenger vehicles produced in China in 2010 was 18.3 percent higher than the average figure in Europe in 2008.

"From a long-term perspective, it's hard for domestic automobile producers to catch up with foreign rivals in terms of technologies and products."

General Motors Co said on Monday that it set an October sales record in China of 220,412 units, up 10.4 percent year-on-year.