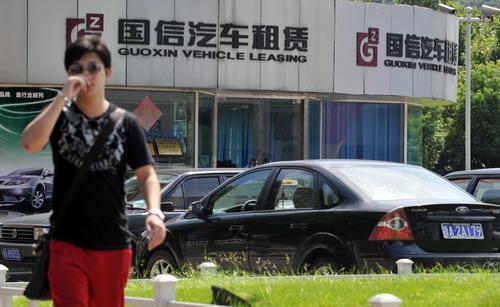 Guoxin Vehicle Leasing, a major car-rental company in Hangzhou, the capital city of East China's Zhejiang province. Car leasing in China saw a boom during the three-day Mid-Autumn Festival in September and the seven-day National Day Holiday that started on Oct 1. [China Daily]

Shanghai-based office worker Chen Hao thought his plan with his friends was perfect. He would fly to Nanning, in Guangxi Zhuang autonomous region, then rent a car there to drive around the beautiful tourist city during the week-long National Day Holiday from Oct 1 to 7.

However, the only problem for the 26-year-old travel-lover, who obtained his driving license just three months ago, was that there were too many people in China harboring a similarly "perfect plan" to his. And, apparently, they had been quicker off the mark.

"I had settled everything and visited the rental company two weeks before the holiday, which is sufficient even for a train trip, usually the most crowded one," said Chen. "It just never occurred to me that the (car rental) market was so hot."

As a result, Chen gave up his plan because the "perfect" car at a "perfect" rental price, a Volkswagen Polo for 129 yuan ($20.20) a day, was no longer available, and the budget traveler was not willing to pay as much as 50 percent more to make his trip "perfect" as planned.

Fueled by millions of young backpackers like Chen, and perhaps, an equally large number of people who work away from their hometowns and who also feel like driving back, the Chinese car rental market saw a boom during the three-day Mid-Autumn Festival in September, a traditional holiday for family reunions, and the National Day Holiday.

"We doubled our car fleet to more than 1,000 vehicles this year in China. But, still, supply is greatly outnumbered by demand," said Terence Chiu, general manager of Avis Car Rental in China.

"Before the Mid-Autumn Festival, bookings flew in a week in advance. With the National Holiday, 70 percent of our cars were booked two to three weeks in advance," Chiu added.

Domestic car rental companies have experienced similar results as international firms. They have been more aggressive in their marketing strategies and expansion in recent years, launching advertising campaigns at places including metro stations and central office buildings months ahead of the two neighboring holidays.

Bookings with Shenzhou and eHi Car Service, two of the major players in the market, showed that during the Mid-Autumn Festival, all cars costing no more than 200 yuan a day to rent were fully booked. Just before the National Holiday, budget cars at these companies, such as the Mazda 2 and BYD FO, were no longer available.

"Now even my friends are coming to me to rent an inexpensive car, but all I can say is, 'Sorry, you have to wait'," Chiu from Avis told China Daily.

Along with the soaring demand, the price of car rentals is, unsurprisingly, also climbing.

According to a salesman with eHi Car Service in Shanghai who declined to give his name, there has been an average of 50 to 60 percent rise in rental fees. With some popular car types, the price has even doubled.

Cars have to be leased for at least three days during the National Day Holiday, according to the terms and conditions on the official website of Shenzhou and eHi.

Despite the higher threshold, customers are not being deterred.

"In the past, the most popular cars were usually economy vehicles with the lowest prices," said Shao Wei, a senior executive with eHi Car Service. "But in recent months, safer and more comfortable cars are gradually gaining momentum, especially among young urbanites, who have learned from experience to trust the new industry."

One of the major driving forces behind the industry's growth is increasing investment from venture capitalists into the capital-intensive business. This has allowed rental companies to buy more new cars and launch wider promotions.

"Basically, it's a market in which no one knows its limit," said Chiu from Avis. "The current situation here is however many cars you can provide, the market can take them all."

Chiu suggested that over the next five years, Avis is planning to invest a minimum of 3 billion yuan in the Chinese market, expanding both its locations and rental car fleet to 10 times current numbers.

Although the short-term rental service, mostly from individual customers, accounted for 25 percent of the company's business in China, Chiu believes there is a huge potential that could be, and may continue to be, the real reason for the strong growth of the market.

There is a wide gap between the ever-increasing number of driving-license holders and the number of civilian automobiles restricted by the government, the limited road space and rising fuel costs.

Statistics from the Ministry of Public Security showed that, by 2010, there were 150 million driving-license holders in China and, in the coming years, the number is likely to increase at the rate of 20 million a year.

In contrast, metropolises such as Beijing and Shanghai are introducing a number of tough policies including limiting purchases of new cars through a sales quota system and car registration plate auctioning.

According to a report issued by the international consulting firm Roland Berger, in 2010, the car rental industry in China achieved an annual turnover of 18.2 billion yuan. By 2014, it is estimated that the market would have more than 400,000 cars and produce 38 billion yuan in annual revenues.