Coming to a flat screen near you

Coming to a flat screen near you 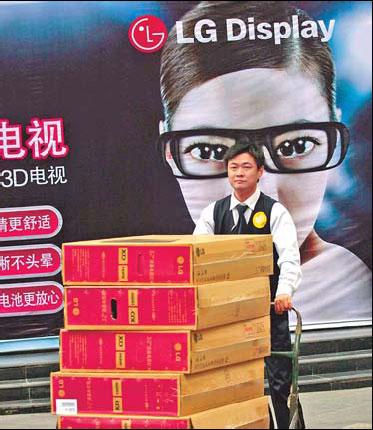 Industry experts are predicting a dramatic surge in sales of three-dimension (3D) televisions - up to 6 million units - in China this year.

When 3D TVs entered the Chinese market last year, the cutting-edge technology and sky-high prices scared off many customers. By the end of 2010, 3D TVs only accounted about 2 percent of total flat-screen TV sales.

"The figure has increased to 11 percent, because prices decreased about 30 percent compared with last year, and more families will consider buying a 3D TV this year or next," said Lu Renbo of the China Electronic Chamber of Commerce.

According to the domestic research company All View Consulting Ltd (AVC), 3D TVs accounted for only 2.6 percent of the TV market in China in the first quarter of 2011. However, the share increased to 15.7 percent in August and 3D capability is expected to be a "must have" function for TV shoppers next year.

There are two different technologies for 3D TVs: the first is called film-type patterned retarder (FPR), and is used by LG Corp, the other is active shutter-glass (SG), which is supported by Samsung Electronics Co.

The two technologies and companies are in competition to dominate the market.

Last year, SG technology was more popular, but according to the latest research announced by AVC, displays using FPR technology accounted for 58.6 percent of all 3D TV sales in August.

Samsung and LG have been aggressively promoting their 3D technologies, but the battle currently seems to be going in LG's favor. About 70 percent of Chinese 3D TV makers have adopted FPR technology.

In order to cater for the Chinese market, the companies are cutting their prices. However, LG has not only slashed the prices of its 3D TVs but is also offering low-cost 3D glasses. In the market, FPR glasses are lighter and can be purchased for about $10 a pair, while SG glasses, which contain batteries, are heavier and cost around $100.

The flat-screen display sector has become one of China's most strategically important emerging industries, according to Zhou Zixue, chief economist at the Ministry of Industry and Information Technology.