TORONTO - The fourth Group of 20 (G20) summit concluded in Toronto on Sunday afternoon after leaders of major economies agreed on a set of targets of fiscal consolidation and measures to ensure a strong, sustainable and balanced growth. 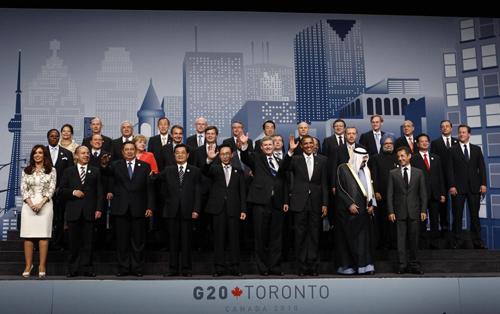 Addressing the media at the closing of the summit, Canadian Prime Minister Stephen Harper said that "firm targets" have been established in a bid to advance economic recovery that is "uneven and fragile."

"Advanced economies have committed to fiscal plans that will at least halve deficits by 2013 and stabilize or reduce government debt-to-GDP ratios by 2016," said the G20 Toronto Summit Declaration which was issued on Sunday.

G20 recognized Japan's situation and welcomed its own fiscal consolidation plan announced recently, and urged those countries with serious fiscal challenges to accelerate the pace of consolidation, according to the declaration.

World leaders recognized that the G20's highest priority is to "safeguard and strengthen the recovery and lay the foundation for strong, sustainable and balanced growth, and strengthen our financial systems against risks."

The declaration said advanced deficit countries should boost national savings while surplus economies will undertake reforms to reduce their reliance on external demand.

The G20 members, including the world's major industrialized and developing countries, account for 90 percent of global output, 80 percent of world trade and two-thirds of the world's population. The Toronto summit, under the theme of "Recovery and New Beginnings," is the first in its new capacity as the world's premier forum for international economic cooperation, as determined at the previous summit in Pittsburgh, the United States last September.

Regarding the financial sector reform, the Toronto summit welcomes the full implementation of the European Stabilization Mechanism and Facility, the EU decision to publicly release the results of ongoing tests on European banks, and the recent US financial reform bill.

Meanwhile, regulatory oversight of financial operations like hedge funds, credit rating agencies and over-the-counter derivatives, which are under much criticism, will be more transparent in an internationally consistent and non- discriminatory way.

Notably, the group has built "earlier commitment to open, transparent and merit-based selection processes for the heads and senior leadership of all those institutions," which suggest possibility of non-European or non-US executives in the future.

The Toronto summit reiterated the importance of anti- protectionism and free trade. The G20 leaders decided to renew for a further three years, until the end of 2013, the commitment to " refrain from raising barriers or imposing new barriers to investment or trade in goods and services, imposing new export restrictions or implementing World Trade Organization (WTO) - inconsistent measures to stimulate exports."

The G20 members commit to rectify above measures as they arise, the declaration said. The summit stressed again the support for bringing the WTO Doha Development Round to a balanced and ambitious conclusion as soon as possible, consistent with its mandate and based on the progress already made.